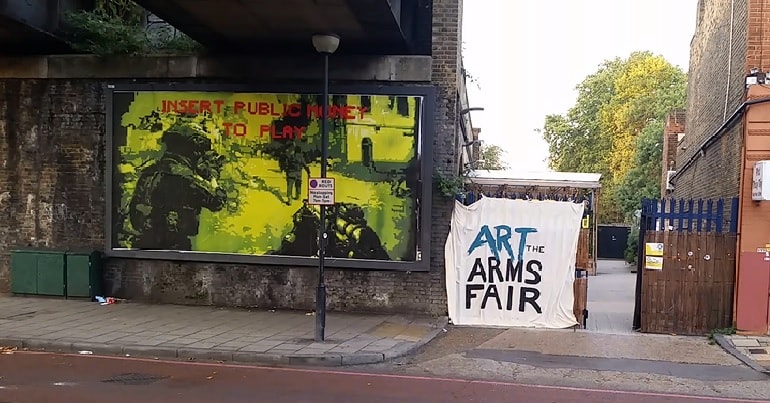 As The Canary has been reporting, the first two weeks of September have seen an explosion of resistance and rebellion against the UK’s arms industry. Among the actions has been a series of artistic events called Art the Arms Fair, designed to reveal and resist one of the world’s largest arms fairs, Defence and Security Equipment International (DSEI).

The Canary visited three galleries in Peckham, south London, which will close at the end of the day on 13 September 2019. The main exhibitions are in two derelict houses which perfectly encapsulate the motif of the brutality of war and the feeling of insecurity which inevitably accompanies it. The insides of the structures are filled with holes that are reminiscent of bullet holes and shrapnel markings.

Some of the drawings, including pictures of territory controlled by Daesh (Isis/Isil), were beautifully drawn realistic renderings.

Edmund Clark’s Section 4 Part 20: One Day on a Saturday

Others were more surreal. On the first floor of the main exhibition on Copeland Road was a pitch black room with a projector showing various picturesque representations of flowers and nature. Meanwhile, a woman’s voice can be heard reading from the military doctrine as it relates to the ‘War on Terror’ and the US torture facility in Guantánamo Bay.

At one point, a female voice is heard saying in expressionless monotone:

(C) US South Com [Southern Command] remains committed to working with our partner nations to support democracy, military professionalism, and the observance of human rights. …Guantánamo Bay [provides] a safe facility to secure and provide appropriate care for detainees. (C) All detainees will be treated humanely and consistent with the principles of the Geneva Convention.

Shortly thereafter, a male voice is heard to say:

I started screaming and shouting, so that perhaps one of the brothers would hear my screams. However, that was out of the question as all of the investigation rooms were soundproof. She said to me, laughing, ‘it’s the weekend, it’s late at night, and there are no officials around’.

The experience becomes increasingly disorientating as one is subjected to an overlapping of voices reading, in Orwellian language, the kind of treatment one can expect in Guantánamo while the voice of a man reading the testimony of a detainee subjected to humiliating sexual abuse intermittently comes in and out.

This continues on a loop.

Quaker Bessie White showed The Canary an embroidered representation of a city in Aleppo, Syria. She told The Canary she was inspired by radical artist Anni Albers:

I thought it would be a good way to represent this scene in fabric. Because fabric is a very gentle way, …very domestic, and I am showing the contrast with the theme – what happens to a city when it gets involved in war.

“All you take are your memories”

A separate work White contributed to is Ordinary Life Disrupted. Items such as a bloodied shirt with holes in it, a handbag, and other pieces of cloth have all been embroidered to tell a story.

“A group of us from our Quaker meeting in West London got together to make this piece together,” White told me. “What happens when suddenly your world is totally destroyed,” she explained.

The story portrayed is as follows:

I was playing when the bombs came. I was at school. I was mending the roof. I was buying food for my family. We dropped what we were doing and we ran for our lives.

And all you take are your memories.

Famed British artist Peter Kennard also contributed work to the project. Among them are metres-long depictions of frayed military medals. Where the ribbons would be, the viewer finds a shredded British or US flag. And instead of medals, we find the bodies of Iraqi civilians whose deaths remain uncounted. 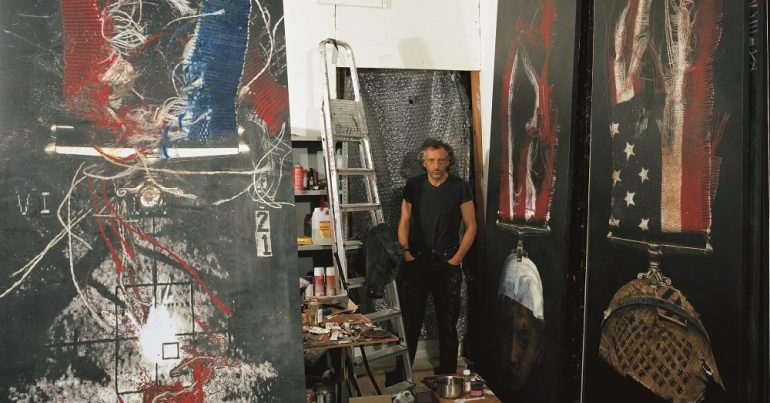 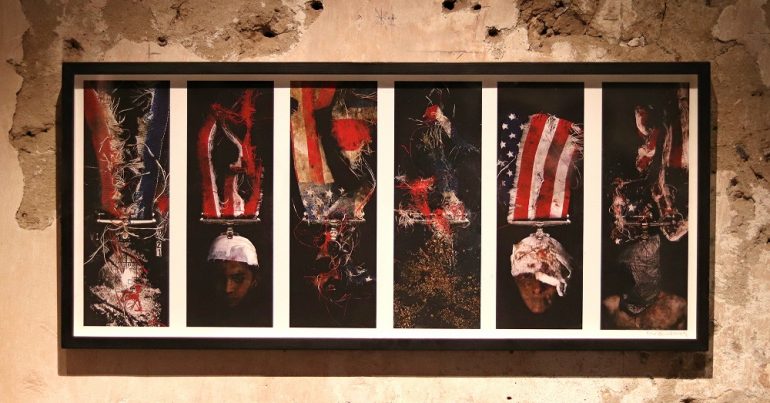 Roxy Minter, an artist, curator and co-organiser of Art the Arms Fair, referred to Kennard as one of the UK’s “unofficial war artists”. Kennard took over the entirety of the AMP gallery in Peckham with his work that is literally metres high. Minter explained that these pictures are part of Kennard’s Decoration series which he “made in 2004 as a response to the Iraq War”.

The more one looks at each grim picture, the more one is filled with a morbid sense of death and loss. It is beautifully done.

Over 70 artists contributed to the galleries. Their pieces are available for purchase, and all of the funds will be donated to human rights organisations such as Campaign Against Arms Trade (CAAT).

On the final day of the exhibit in 2017, Banksy’s piece Civilian Drone Strike secured £205,000 at auction. All of the money was donated to CAAT and human rights group Reprieve. Art the Arms Fair will hold a similar auction on 13 September at AMP STUDIOS.

Art at its best evokes a range of emotions – it provokes and challenges – and in this sense the curators and activist artists have succeeded in every count. Resistance takes many forms. As the UK continues to fuel some of the world’s worst humanitarian crises, in countries like Yemen, the resistance to these policies will only continue to grow.

People can show their solidarity by attending the exhibits on its final day, 13 September 2019. Everything is for sale from the galleries or going to auction. The Organisers will also do sales for things not going to auction via email – and they have a catalogue of work and prices on their website.