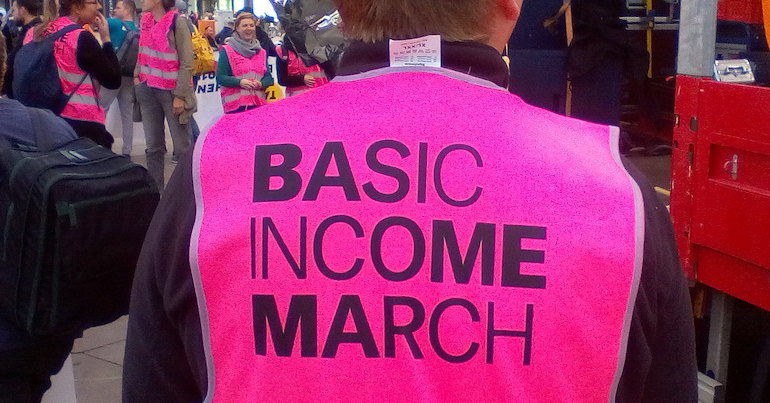 On 23 July, Brighton and Hove City Council will become the first in the UK to debate whether the city should trial Universal Basic Income. This is a debate that’s been triggered after a petition, started by Basic Income SE on 25 March 2020. It quickly gathered more than enough signatures needed to trigger the discussion on a pilot in the city.

Is Brighton and Hove the ideal place for a universal basic income pilot?

What’s a Universal Basic Income (UBI) and why are people in Brighton so interested in having a trial? It’s a regular payment, paid directly to all individuals without any conditions. Yes, it really is that simple. There are no strings attached – it’s a straightforward transfer from the state to the individual. Sounds fantastic, doesn’t it, so, you have to wonder why the idea hasn’t caught on before.

There are many reasons, but mainly it’s because many don’t think it’s possible. That’s something that’s not been helped by a lack of support across the political spectrum for the idea until now, especially from those in power.

But it doesn’t have to be like this. Just look at how passionately people support universal healthcare (our NHS), and you see the key idea of a UBI, universality, is one people can and do support. If you remove the toxic narrative that’s been spun by those looking to gain by dividing everyone, and who want to make society one big competition with barriers erected to trip people up, you’ll see how vital a UBI is when it comes to making life an equal opportunity for all.

How can we show things could be better? Well, a UBI pilot would put universality back at the front of the queue of welfare policies – an alternative to the disastrous Universal Credit system our government continues to support, despite mounting evidence it doesn’t work and criticism from a huge range of civil society organisations, including the UN poverty inspector – and show we can build back better after the coronavirus (Covid-19) crisis.

A UBI pilot would debunk the myths surrounding the concept – that everyone would stop work and become lazy, cause inflation, be unaffordable, or require increasing taxes for everyone.

More importantly, a pilot is the perfect opportunity to have an in-depth conversation about how our society operates and the sustainability of our current practices, something we rarely get the chance to do.

So, what do we define as our basic needs? What are the consequences of not meeting these needs? Are we valuing the right things? Is there too much of an emphasis on work? Are we valuing certain jobs more than others, and is this fair since we all contribute to society in different ways?

All big questions that require honest and imaginative answers, but now is the time to ask if there’s a better way of doing things. A UBI could help make the transition we all so desperately need, to a better, fairer, more equal society.

A new group – Basic Income South East – is campaigning for UBI pilots across the South East. There’s been great work done on the topic in Scotland (the Scottish government commissioned a feasibility study to look at potential technical issues of a trial), and by the UBI Lab Network in many northern cities, including Liverpool, Leeds, Newcastle, Sheffield, Hull, which have all had backing from their local councils.

The buzz has attracted the attention of John McDonnell, former shadow chancellor to Jeremy Corbyn. He pushed for trials to be included in the 2019 Labour Party manifesto. This was a big step in the right direction for a party that’s never previously supported the idea.

Why trial a basic income in the ‘rich’ south?

The South East is one of the most affluent regions in the UK, but it still has gross levels of inequality within it. Many urban areas along its coast are some of the most deprived in the region and country.

In Brighton and Hove, for example, the levels of inequality are high, with several areas in the bottom 10% of inequality across the UK, while others are in the top 10%. One area of the city – Whitehawk – is in the 1% of the most deprived areas in the UK, according to the multiple indices of deprivation study of 2019.

UBI has at its heart fairness and equality for all. The majority of UBI pilot proposals source their income by progressive means that tax those with higher incomes and wealth at a greater level than those with less. This is a redistributive system that looks to reduce the inequality gap.

Besides this, UBI also has the potential to reduce poverty rates. It would be given on top of other benefits, such as housing and disability – so people living in more deprived areas, or with higher needs, would see their current welfare payments increase as a proportion of income. Compass has stated a UBI could reduce child poverty “by more than a third”, working-age poverty by a fifth, and pensioner poverty by “almost a third”.

Help beyond poverty too

But it’s not just the inequalities in Brighton and Hove that make it an ideal place for a trial. The city’s also one of the UK’s startup capitals, according to the Association of Accounting Technicians (AAT). This is especially true for the tech sector, with Computer Business Review asking if Brighton may be ‘Silicon Valley by the Sea’. It’s also a hotbed of arts, crafts, and culture. The city’s entrepreneurial spirit is strong and UBI would help encourage this.

UBI would reward and value those working in Brighton and Hove’s charity and voluntary sectors. Over 50% of adults volunteered in 2019, giving 4.5 million hours of work worth a staggering £37 million to the local economy.

It’s clear Brighton and Hove is a ‘giving’ city and people want to contribute to society. UBI would also enable people to volunteer more, unleashing a wave of additional activity and strengthening the city’s civil society.

Finally, Brighton and Hove is one of the UK’s most radically progressive places politically. One constituency elected the country’s first Green MP, Caroline Lucas, over 10 years ago, typifying the city’s willingness to explore new ideas and push boundaries.

How to get a pilot ‘Brighton and Hove style’

1.  Gather a team: You need to have a few of you working together on this as it can be quite overwhelming to lead a campaign by yourself. There are various places to identify people from social media, political parties, and campaign groups in the area. If you get a few key, well-connected individuals in the area, you should be able to gather a team.

2.  Meet-up: choose a place and time for your team to meet up and get together. You can find out about each other’s interest in the area and capacity to get involved. Setting up a WhatsApp group or similar can help to keep in regular contact.

3.  Decide on a campaign and strategy: you could launch a petition, or approach councillors to put a motion on your behalf. You could just decide that you aren’t ready for a campaign straight away of course, and instead choose to build more capacity in your group by setting up social media pages, contacting local groups, and hosting events to draw in more support and raise awareness for the idea.

4.  Launch campaign: get some speakers, host an event, and promote the campaign.

5.  Generate buzz: get articles in papers/magazines, speak on local radio, host more events to further raise awareness of the campaign and the group. Get people to sign your petition by sharing online and lobby councillors to join your campaign.

6.  Basic income proposal: come up with an outline proposal for a trial and generate more press and host more events – you’re getting the hang of this now!

7.  Information to councillors: communicate with councillors in the run-up to the council debate to address FAQs and concerns that they might have. You could host an event for them or organise to speak to their political groups.

8.  Present your petition and get the council to support a trial in your area: hopefully, by the presentation date, you will know whether the council will support it or not.

Our rights as citizens

The people of Brighton and Hove have been incredibly receptive to the idea of UBI and a pilot in the city. The petition easily reached the required number for a council debate within a month. We’re currently at Stage 5 of 8 in our quest to present our ideas to the council in person and get a pilot in the city. We’re also continuing to ‘generate a buzz’ for the campaign and are busy working on our own UBI pilot proposal.

This all sounds pretty grand, but we’ve done nothing particularly extraordinary, just exercised our rights as citizens to ask our council to consider an idea we think is important. Anyone who wants to join us and campaign for a pilot to take place in their town, city, or region can do so relatively easily by following the steps above or by coming up with their own campaign plan.

If you’re located in the South East, get in touch with Basic Income South East. There are plenty of other organisations across the country that can help, too, including Basic Income Wales, Citizen’s Basic Income Network Scotland, and UBI Lab in the North. All those organisations are working for the same thing – a UBI for everyone in the UK, and all will be happy to support a campaign in your area.

Let’s get UBI pilots supported in every city and region of our country and show the government that there is a new way forward.