Here's the best birthday present you can give the NHS - Canary 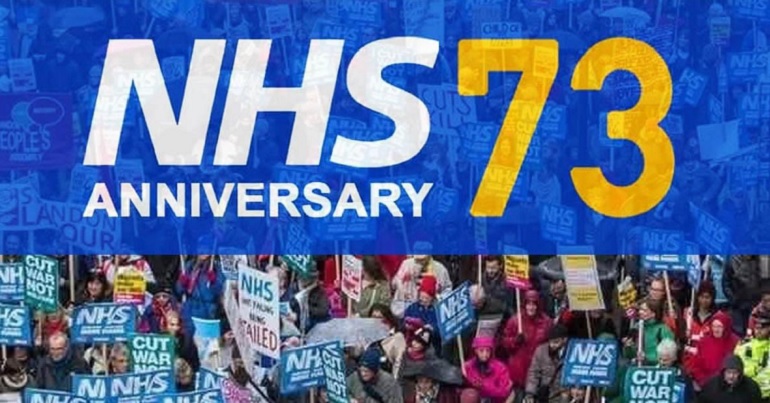 It’s the NHS’s 73rd birthday on 5 July. So, what better way to mark the occasion than with dozens of demos to protect it, happening up and down the country?

A not-so happy birthday for the NHS

As a leaflet said, when the then-Labour government launched the NHS in 1948:

It will provide you with all medical, dental and nursing care. Everyone – rich or poor, man, woman or child – can use it or any part of it. There are no charges, except for a few special items. There are no insurance qualifications. But it is not a “charity”. You are all paying for it, mainly as taxpayers, and it will relieve your money worries in time of illness.

But sadly, over decades, that founding idea has been eroded. From huge staff vacancies, to unsuitable equipment via massive waiting lists, not enough beds, and charities propping it up – the NHS is in a sad state. Of course, most of this is due to political decisions by parties of all stripes. But it’s undoubtedly become worse under Tory rule since 2010. So, on Saturday 3 July, people will be showing their anger at politicians. But they’ll also be showing support for our health service.

Taking to the streets

The demos have been called by a number of groups: Keep Our NHS Public, Health Campaigns Together, NHS Workers Say No, and NHS Staff Voices. They said they’re demanding:

patient safety, pay justice and an end to privatisation

Demos are happening across the UK: 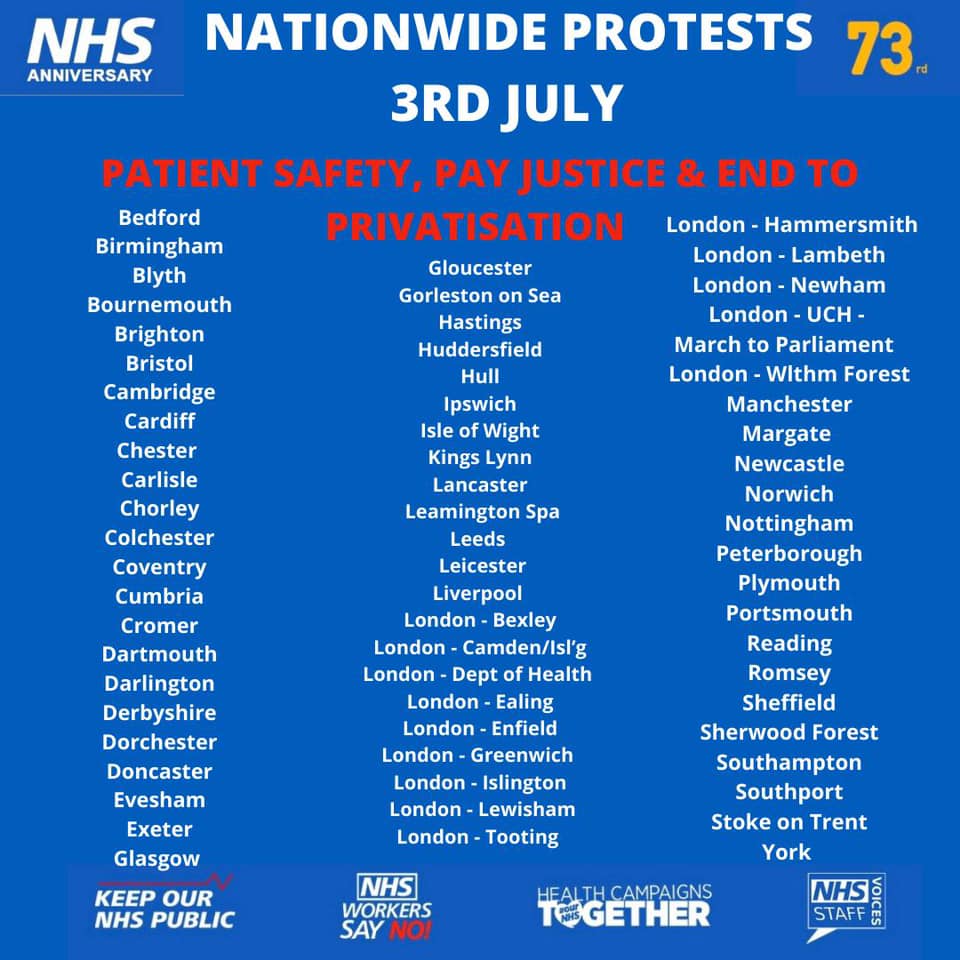 You can find details on many of them here. They include demos in Bristol, Cambridge, Cardiff, Derby, Glasgow, various ones in London, Manchester, and Sheffield.

Holly Turner, an NHS nurse who’s also part of NHS Workers Say No, summed up the situation. She told The Canary:

We are urging NHS workers and supporters take to the streets across the UK this NHS Anniversary weekend.

We are in a critical moment. The NHS has had a decade of underfunding. The government has not protected the NHS budget. We have faced brutal cuts to services. There is a crisis in recruitment. Half of all staff in the NHS report that the current situation stops them doing their jobs properly. We have less beds per capita than any other comparable country. Cuts to social care services have added huge pressure to the NHS. There are simply not enough services available to support vulnerable people in our communities. We also have private companies continuing to win big contracts to run struggling NHS services for profit.

But the challenge is the Tory-created crisis in the NHS is only getting worse.

For example, as The Canary reported in March:

Boris Johnson’s promise to “fix the crisis in social care once and for all” has so far not happened. And of course, his government has only given many NHS staff a 1% pay rise this year.

So, Turner said NHS groups and workers are “demanding answers” over what’s going on in the health service. She told The Canary:

NHS Workers continue to wait for their pay award which was due in April. The government delayed it until mid-June. And then it has delayed it yet again. Why? We are demanding answers. And we refuse to allow this government to abuse the goodwill of workers to deal with the 100,000 staffing deficit. In addition, Sajid Javid is the newly appointed Health Secretary. We know he is hell bent on a US-style private insurance-funded health service. He is not to be trusted. The fight now is more urgent than ever.

If you can’t go to the demos, you can protest online. You can post on social media using #NHSPay15 #NHS73 and #NHSAnniversary.

There’s no more fitting way to celebrate the NHS’s birthday than to fight to protect it from the Tories. So, if you can get involved – do. We all depend on it.