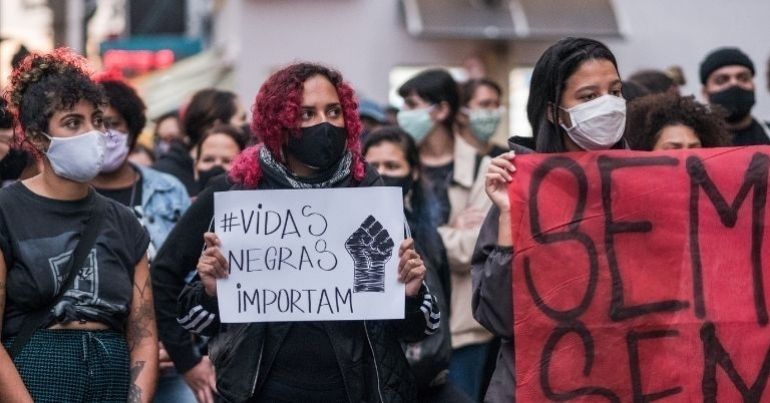 Anti-racism protests have erupted in Brazil following the brutal killing of a Black man by two white security guards outside a Carrefour supermarket in Porto Alegre on 19 November. The incident took place following a confrontation between the man and a supermarket employee.

The incident was caught on video and took place in front of many witnesses, including the victim’s wife. The death of 40-year-old Afro-Brazilian João Alberto Silveira Freitas was reminiscent of the murder of George Floyd which sparked Black Lives Matter protests in the US and beyond in summer 2020. The video shows scenes of one white security guard restraining Frietas, while another repeatedly beats his head and face outside a Carrefour supermarket in Porto Alegre on the night of 19 November. Other clips show Freitas’ back being kneeled on. One of the guards was an off-duty military police officer.

The killing took place on the eve of Black Consciousness Day, a day set aside to commemorate the history and celebrate the contributions of Black people in Brazil. Clips of the video, which were shared on social media, sparked anti-racist protests across Brazil. On 20 November, Brazilian Black Lives Matter protesters took to the streets calling for justice for Freitas, and protesters in São Paulo stormed a local Carrefour supermarket.

Carrefour released a statement expressing regret about Freaitas’ “brutal death”. The corporation says it intends to hold those responsible to account. It will also end its contract with the security firm the two men were employed by, fire the store manager, and close the store where the incident took place. The men who beat Frietas have been detained, and are being investigated for homocide.

Brazil, the last nation in the Americas to abolish slavery, has a long, troubled history of race relations. Today, Black and mixed-race people make up approximately 57% of Brazil’s population, but constitute 74% of victims of lethal violence, and 79% of those killed by police. Government officials took to Twitter to lament Frietas’ death, but deny that the incident reflects the wider problem of structural racism in Brazil.

Responding to the protests, Vice President Hamilton Mourão lamented the incident at Carrefour, but denied it reflected racism:

Racism doesn’t exist in Brazil. That is something they want to import here.

I lived in the United States. There is racism there.

Meanwhile, president of the Palmares Cultural Foundation, the government official in charge of preserving and promoting Black culture in Brazil, Sérgio Camargo referred to the Black Lives Matter movement as “lefty garbage”.

Brazil’s government has a history of denying that racism is an issue in the country, so Mourão and Camargo’s responses come as no surprise. However, their demonisation of protesters and refusal to acknowledge the existence of structural racism in the Brazil is still extremely concerning. Their public responses to the country’s anti-racist protests demonstrate that change is necessary, but it will not likely come under the current administration.