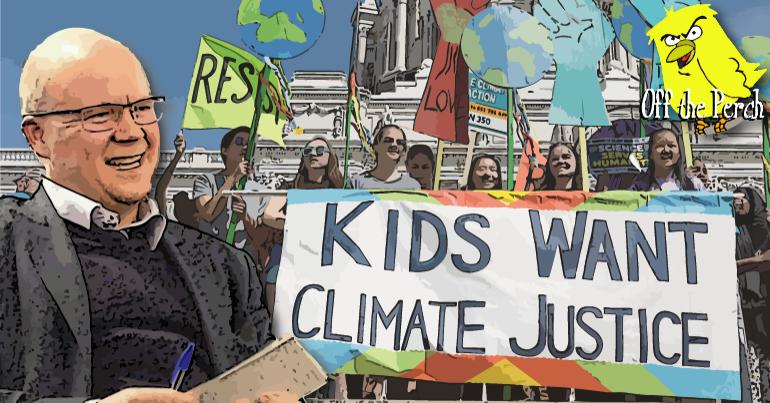 On 15 February, children across the UK protested against government inaction on climate change. The collapse of the planet would be quite a nuisance – certainly more of a nuisance than missing one day of school. Unsurprisingly, the people who disagree are all the usual idiots:

toby young does not understand what a strike is https://t.co/ZWbOADN2Jt

Around 2,000 sixth formers who bunked off school have been protesting in Parliament Square have now wrecked the newly planted grass. And they are worried about climate change? What about the lawn?

Scientists have deduced that man-made climate change will lead to many people being dead/incredibly thirsty. This would render any knowledge that people acquired as children useless. The right wing can’t have people out protesting things, however. As such, they need to pretend climate change doesn’t exist (or that it’s somehow caused by discarded rubbish):

I’m not saying climate change is or isn’t real. Although if I had to stake my reputation – of which I have none – I’d say it isn’t. But even if it is, how are the adults of the future going to deal with it after missing literal minutes of education? What if the solution to carbon emissions was revealed in period four RE, and these little twerps missed it? When you look at it like that, I’d say these children are more responsible for climate change – which doesn’t exist – than Esso.

With so many idiots trying to draw attention to themselves, Dan Hodges struggled to stand out. In the end, he went for some textbook whataboutery:

Climate change is apparently a Left wing vs Right wing issue, according to Dan Hodges. No, Dan. It's scientific evidence vs mindless denial. It is young people seeking to protect their future vs sad reactionaries. You decided to pick a side, Dan, but got it wrong. So wrong. pic.twitter.com/JN2jFUyENt

Sure – the death of all life on the planet would be bad, but is it not equally bad for these children to be chanting ‘Dan Hodges has shit for brains’?