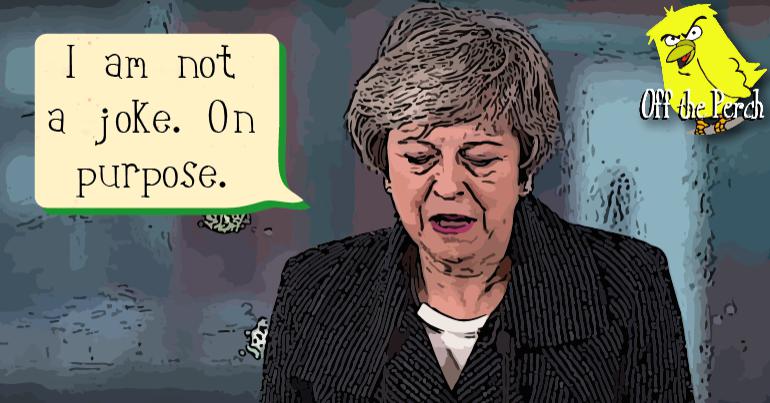 Following intense speculation, Theresa May has denied that her handling of Brexit is an elaborate prank. During the speech, the set behind her collapsed and she paused mid-sentence to do a horrible jig of some description.

So is it actually a joke? Has her whole premiership been one long wind-up?

Despite her earlier claims, May later reversed her opinion completely. In a second speech, she said:

Yes, I’m afraid it has all been a big joke. Hee hee – what a naughty prime minister I am. Like when I called a snap election I said I’d never call then lost seats – that was a jape, wasn’t it? Also, who can forget when I called the people I needed to back my minority government ‘saboteurs’ and ‘citizens of nowhere’? And speaking of ‘citizens of nowhere’, remember when I illegally deported the Windrush generation?

This is why everyone says I’m a joke.

Although this seemed somewhat plausible, one of May’s whips later told us:

She did do it all on purpose – she just wants people to stop thinking she’s useless. Typically, she’s done a crap job of making people think she’s a joke.

Her claim to have a sense of humour fell apart when a journalist asked if May had a favourite funny person, and she answered, “Michael Portillo”.