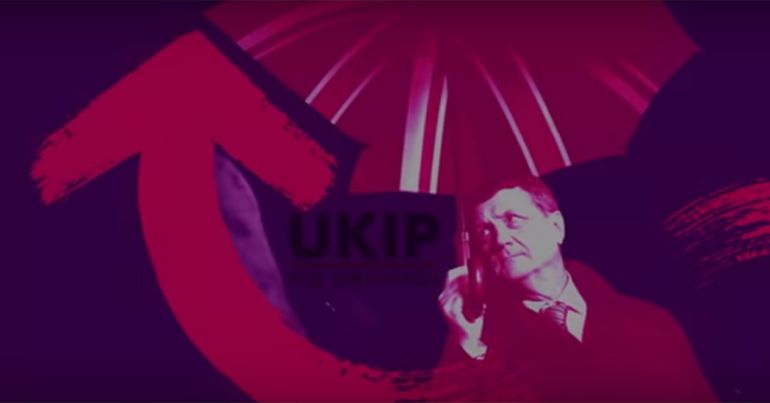 A fascist-linked political party behind a campaign to de-select remainer MPs has scored a victory after a vote of no confidence in Dominic Grieve was passed at his local Conservative association. Now it can be revealed that it was only two days before the Christchurch massacres that the killer urged his followers to donate to a video channel that promotes that same political party – UKIP.

The following message by the Christchurch killer has been retrieved from a deleted social media account:

The message links to a video featuring British Union of Fascists leader Oswald Mosley. It also urges followers to donate to a video channel that promotes UKIP:

The message by the Christchurch killer was posted on 13 March, only two days before he began his shooting spree that killed 50 people and injured 50 more.

But UKIP is no stranger to fascism. Indeed, in November 2018 its leader, Gerard Batten, hired English Defence League founder and convicted fraudster Stephen Yaxley-Lennon (aka Tommy Robinson) as an ‘adviser’. Batten also associates with Daniel Thomas (aka Danny Tommo), a convicted and jailed kidnapper. Yaxley-Lennon’s bodyguard, Glen Saffer, celebrated his birthday with a party, to which Batten was invited.

This photo from today is of Frank Portinari and Gerard Batten. Frank is the head of the UDA on the ‘mainland’, and a convicted terrorist. Gerard is the leader of UKIP. pic.twitter.com/2T18MwwES9

Grieve blamed Jon Conway, the defeated UKIP candidate who stood against him in the 2017 general election, for organising the no-confidence vote.

Dominic Grieve deselection campaign being led by someone who not only stood against him as Ukip candidate in GE 2017, was a UKIP local council candidate and local branch chairman of Ukip, but also stood for the UKIP National Executive Council in 2016… now a Conservative. pic.twitter.com/fuQ4wJilqz

There is clear evidence that there was an orchestrated campaign by my UKIP opponent in 2017, who has since joined the association, with the express intention of trying to come along and defeating the motion.

The meeting at the association was raucous, according to the Sunday Times:

The de-selection campaign is not all down to Conway or even UKIP. Leave.eu, the Brexit campaign group that was fronted by then UKIP head Nigel Farage and bankrolled by millionaire Arron Banks, is playing its part too.

In August and September 2018 articles in the Sunday Times, Banks referred to his launch of an ‘entryism’ campaign as a ‘Blue Wave’ movement.

The best way to secure Brexit and our country’s future is via the Conservative Party. It is in government and, for now, calls the shots. To that end I am urging the 90,000 members of my Brexit campaign Leave.EU, and the 1.4m who follow us on social media, to join the Conservatives and have a say.

Banks claimed that at that point in time 4,000 leave voters “at his instigation” had joined the Conservative Party as part of Blue Wave. He also named Grieve as a target.

In response to the no-confidence vote against Grieve, Banks claimed there were now 20,000 new members of the Conservative Party recruited by Leave.eu:

Oh dear never mind, https://t.co/MeDrmpA8ZJ recruited over 20,000 new members of the Conservative party and I’m sure this helped. Frankly the behaviour of people like you that have tried to overturn a democratic vote has been utterly disgraceful ! https://t.co/SWfAzuPHPI

And it’s worth noting that in February 2019, Leave.eu and Banks’s insurance company, Eldon, was fined £120,000 for data breaches during the 2016 EU referendum campaign. The Information Commissioner’s Office is currently conducting an audit of Leave.eu and Eldon. The National Crime Agency is also investigating Leave.eu over possible financial irregularities.

Batten’s association with the far-right is no aberration but is now seen by the anti-fascist organisation Hope Note Hate as the norm:

UKIP has moved to the far right. They occupy the space the BNP used to hold. Share this video so people know the facts about UKIP and their violent associations. pic.twitter.com/bRBMk7NoZf

So it’s not surprising that the man who carried out the Christchurch massacres was happy to urge donations to UKIP’s video channel.

UK political parties – and we cannot assume this applies just to the Conservatives – are under threat by the fascist-linked UKIP and its ideological soul-mate Leave-eu. The Grieve no confidence vote is a wake-up call.