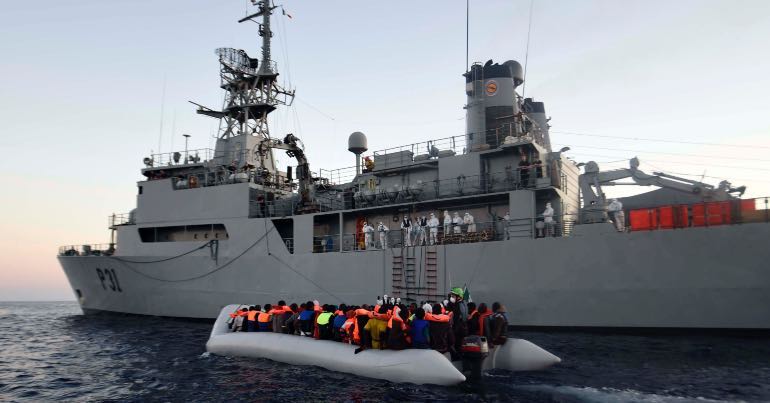 A group of Irish NGOs have criticised the EU’s decision to end rescue missions in the Mediterranean.

The Irish navy has rescued more than 18,000 people from the Mediterranean Sea since it began its operations there. But the EU announced on 29 March that it will temporarily stop sending its “naval assets” into the area, as part of Operation Sophia. This includes Irish Navy ship the LÉ Eithne. Instead, it said that it will be “strengthening surveillance by air assets as well as reinforcing” the Libyan coastguard and navy.

The Irish Refugee and Migrant Coalition (IRMC) said it was ‘alarmed’ at the development.

In a press release, the IRMC expressed “serious concerns” about the rescue missions ending. Nick Henderson of the Irish Refugee Council argued that “the risk of death has increased” for people trying to make it across the Mediterranean. This is despite the fact that “the number of people trying to cross the Mediterranean has decreased”. As a result, Henderson along with other NGOs:

call on the Irish Government to try to work with other EU governments with a view to maintaining the presence of the Irish navy and to continue but improve Operation Sophia.

He went further, saying “This is an opportunity for Ireland to lead on these issues”.

Amnesty International Ireland also criticised the move. Its executive director Colm O’Gorman said ending the rescues is “an outrageous abdication of EU governments responsibilities”. He also criticised the fact that the EU will be helping Libya to take back migrants and refugees. O’Gorman pointed out that:

EU governments will continue to use aerial surveillance to alert the Libyan Coast Guard when refugees and migrants are spotted at sea, so they can be taken back to Libya, despite knowing that people there are arbitrarily detained and exposed to widespread torture, rape, killings and exploitation.

Siobhán McGee of ActionAid Ireland made similar comments. She said Ireland must uphold the 1951 Refugee Convention. Otherwise, she asserted, Ireland will be “aiding and abetting the further persecution of refugees”. She declared that:

barbed wires and guns will not stop desperate people from seeking a better future.

The Canary has previously reported on the deaths of people trying to cross the Mediterranean.