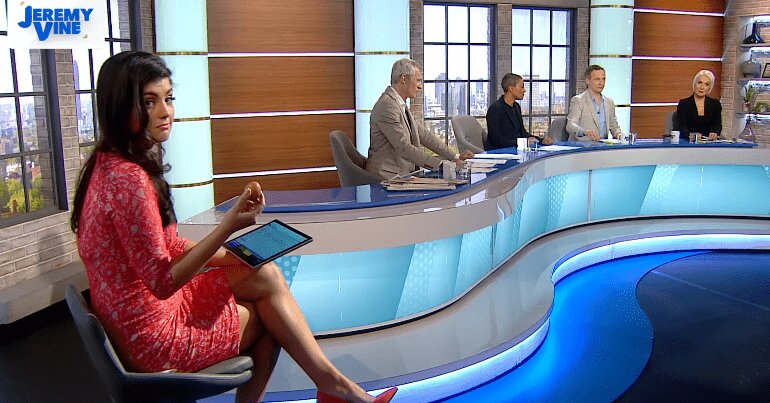 “Attack on our democratic process”

An attack like this is an attack on our democratic process. This is a public servant and attacks on MPs must stop. The message must go out – this must stop.

CCTV footage shows Murphy hitting Corbyn on the side of the head while holding an egg at Finsbury Park mosque and Muslim Welfare House:

CPS has released CCTV of the moment Labour leader Jeremy Corbyn was hit over the head with an egg. Fair play to Corbyn for keeping tight hold of his plate of food throughout pic.twitter.com/Kv7G5Wnjjb

The Channel 5 show made a joke out of the situation:

We hate to say it but there appears to be some “cracks” forming in Storm and Jeremy’s onscreen relationship…@TheJeremyVine | @StormHuntley | #jeremyvine pic.twitter.com/HFX2lYcWD3

Someone on the programme jokingly claimed that co-host Storm Huntley should be arrested for cracking the egg on Vine’s head.

There was an MP who was murdered

But on social media, people were not impressed. They noted that a far-right terrorist murdered Labour MP Jo Cox on 16 June 2016 and that another terrorist wanted to kill Labour leader Corbyn:

Someone at a rally pushes a journalist and media goes wild, rightly so. An elderly politician is punched with an egg in their hand, convicted, and the media trivialise it.Very dangerous times, MPs have death threats, have been killed, but it's all a joke to you. Have some respect

An egg was not thrown, it was held in a fist that landed hard on a 69 year old man's head. You think that's funny do you?

Now try punching him in the side of the head. See if he can tell the difference then. 🙄

In response, Vine denied he ‘minimised’ the assault:

If you didn't watch it, I can help you. We did no such thing.

The male was repeatedly shouting ‘respect the vote’ while being restrained by staff. Mr Corbyn described… the male with his face contorted in anger. He appeared to be acting in a very aggressive manner after striking him.

It’s concerning that a violent man was able to get close enough to Corbyn to hit him over the head with an egg. And it seems deeply irresponsible for the Jeremy Vine show to make light of an attack on the leader of the opposition.