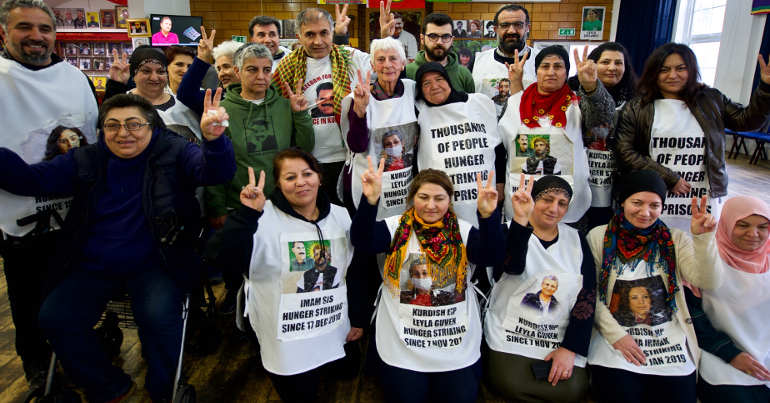 UPDATE: This article was updated at 3.12pm on 3 April to include calls from within the Kurdish freedom movement for suicides to stop.

Öcalan co-founded the Kurdistan Worker’s Party (PKK), which has fought for Kurdish freedom and autonomy since the 1970s. He has been imprisoned by Turkey for 20 years. Turkey has defined the PKK as a ‘terrorist group’. Most Western states followed suit, as they see Turkey as a key trading partner and NATO ally.

The hunger strikers are demanding that Öcalan be allowed to see his family and lawyers.

Lawyer Margaret Owen told The Canary she has joined the strike because:

there will be no peace between Turkey and the Kurds until Öcalan is released, you cannot negotiate a peace while the leader of the other side is in prison… He’s been asking for peace, it was Turkey who broke off all those peace negotiations in 2015.

Owen said that everyone should read Öcalan’s writings as they are “a model for the sort of society that we all deserve. Showing a way to have a peaceful and just society with gender equality at the centre.”

According to Owen, “Öcalan has not seen his lawyer since 2011, or his family since 2016″, apart from being allowed to see his brother for fifteen minutes in January.

Brutally pushed back by the police with their riot shields

I was privileged to be invited by the HDP [Peoples’ Democratic Party] to go to Amed to try to see Leyla when she was still in prison, but we weren’t allowed to see her. We were rather brutally pushed back by the police with their riot shields and water cannons.

Güven has now refused food for 147 days (as of 3 April 2019). Thousands more people around the world are on hunger strike. Seven people have taken their own lives this year in protest at the isolation of Öcalan. Six of them were Kurdish political prisoners in Turkish prisons. Siraç Yüksek was the latest person to take this action. His death was reported on 2 April. Güven and others have called for these suicide actions to stop, and for the movement to focus on the struggle of the hunger strikers.

I have to do this because I don’t know what else to do. Even Sabiha, Leyla Güven‘s daughter asked me not to do it and to pursue diplomatic channels.

But Owen says that she had tried everything to pursue diplomatic channels, to no avail.

The HDP invited people from around the world to come as independent observers of Turkey’s municipal elections on 31 March. Some of the delegates from the UK visited Leyla Güven and her family the following day. They told The Canary:

We visited Leyla on her 145th day of hunger strike. Her health has deteriorated a lot. The day we visited, she could no longer take fluids or her vitamin B1. Her daughter asks all international people to put more pressure on Turkey, to contact MPs and to pressure the CPT [the European Committee for the Prevention of Torture and Inhuman or Degrading Treatment or Punishment] to take action immediately to end the isolation of Öcalan. Leyla’s spirit is strong but her health is seriously critical and time has run out. Action is needed now.

A ‘green light for dictators’

I was born in 1932 and I remember how we appeased Hitler. We didn’t have social media then but now it’s all out there. It is very dangerous what we’re doing now. [Turkish President] Erdoğan has very publicly shouted out that he is not bound by international law and that he won’t implement a ceasefire after Afrin [the Turkish attack on Afrin in Rojava, Northern Syria]. It gives a green light to dictators.

It’s not just what is happening to Öcalan, Turkey is conducting a genocide against the Kurds in Turkey and Syria. It is incumbent on us to speak out against injustice. I have asked Secretaries of State at meetings and written to endless people but nothing happens.