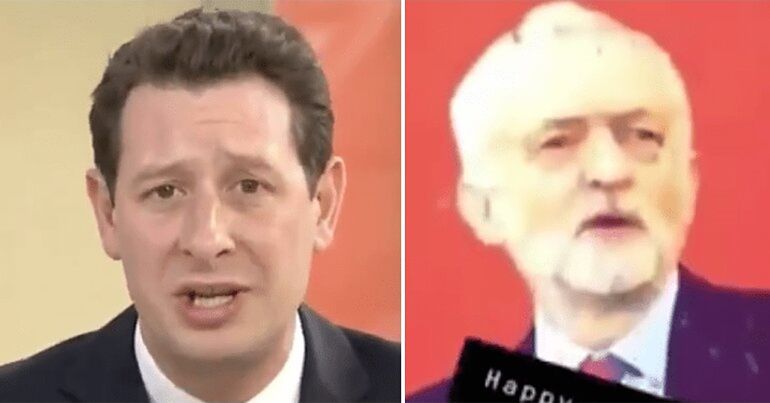 There is outrage on social media after a broadcast from Sky News defence correspondent Alistair Bunkall.

Bunkall suggested that UK soldiers have been using an image of Jeremy Corbyn for target practice because the Labour leader has questionable “security credentials”:

Oh my god I cannot believe what I have just seen and heard!!@Skynews explicitly linking the footage of soldiers firing at an image of Jeremy Corbyn to concerns about his "security credentials".

You heard just there from Mark Harper, Conservative MP, questioning the security credentials of Jeremy Corbyn. And that is a well-known criticism, a well-bounded [sic] criticism of Jeremy Corbyn. It exists within the military as well as you expect. But the British armed forces have to be steadfastly apolitical. And so a video like this really is not a good look.

It’s worth noting that, as leader of the opposition, Corbyn is a member of the privy council and therefore the security services will effectively have vetted him.

Former sergeant Trevor Coult shared and then deleted the clip of soldiers shooting at the image of Corbyn in Kabul, Afghanistan. Coult claimed the image had been photoshopped, but Bunkall said the Ministry of Defence confirmed it was genuine.

We are aware of a video circulating on social media, this behaviour is totally unacceptable and falls well below the high standards the Army expects, a full investigation has been launched.

‘Turned a thoroughly decent politician into a hate figure’

On social media, people pointed out that the hatred of Corbyn doesn’t come from thin air:

Let's be clear, they learned this hatred of Corbyn from a single source – corporate media. It's astonishing how journalists have turned this honest, compassionate, thoroughly decent politician into a hate figure. https://t.co/hYZ5477PXW

Apparently we are not allowed to blame the hard right press for shamelessly whipping up hatred against Jeremy Corbyn, leading to soldiers shooting at an image of his face and physical attacks against him. Strange they don’t see any responsibility having done all this and more: pic.twitter.com/0rHPPBguEB

This is utterly deranged reporting in response to a target of a civilian politician being shot at (from whatever party). Shame on you @SkyNews https://t.co/qGs72bRnKN

The reporting from Sky News is utterly shocking. The army is using an image of the leader of the opposition as target practice. Yet Sky seemed to explain away the video with bogus allegations that Corbyn is a ‘security concern’. Terrible form.