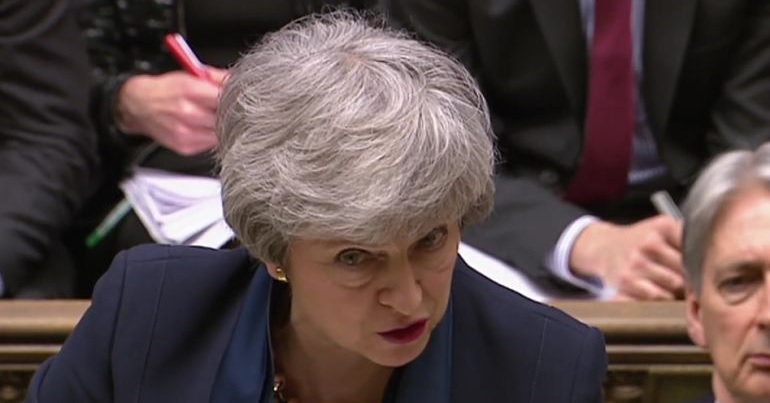 A video emerged on 3 April that appeared to show soldiers using Jeremy Corbyn’s face for target practice. Given the very real or threatened violence faced by MPs, the discovery is chilling.

The Conservatives’ response to it, however, was also deeply disturbing. Because since the video appeared, the party’s politicians have variously insinuated – or claimed outright – that the Labour leader is a Marxist, terrorist-loving Russian stooge who’s determined to ruin Britain. Even the prime minister has joined in the attacks.

Most of the accusations are part of the pushback against a bigger role for Corbyn in Brexit. But it’s beyond irresponsible to promote that sort of narrative in the current climate overall, let alone after a video of soldiers allegedly ‘taking down’ the leader of the opposition emerges.

On 2 April, Theresa May announced that she would enter talks with Corbyn over the Brexit impasse. Seemingly in reference to this, Conservative MP David Jones asked her a question at PMQs on 3 April:

Does it remain the position of the PM that the leader of the opposition is not fit to govern?

In response, May said:

I do not think that the Labour Party should be in government… The right honourable gentleman, the leader of the opposition, and I have different opinions on a number of issues. If I may just highlight one issue… when we suffered a chemical weapons attack on the streets of Salisbury in this country, it was me as prime minister, this government, that stood up against the perpetrators of that attack. The right honourable gentleman said he preferred to believe Vladimir Putin than our own security agencies. That is not the place of somebody who could be prime minister.

In reality, Corbyn did nothing of the sort. When former Russian and UK spy Sergei Skripal and his daughter Yulia were poisoned by a chemical weapon in Salisbury in 2018, the Labour leader said the UK should hold the perpetrators to account “on the basis of the evidence”. He also called for “firm multilateral action” to ensure such a crime never happens again.

Nonetheless, May should have thought better than to spread this blatant falsehood on the day the ‘target practice’ video appeared. Especially when media outlets are linking the footage to Corbyn’s “security credentials”:

Oh my god I cannot believe what I have just seen and heard!!@Skynews explicitly linking the footage of soldiers firing at an image of Jeremy Corbyn to concerns about his "security credentials".

May wasn’t alone though. A number of Conservative politicians tried to paint the Labour leader as a danger to Britain on 3 April:

Of course, none of these accusations are new. The establishment class has long tried to use Corbyn’s positions on defence and the economy as a stick to beat him with – despite substantial public support for those positions.

But for high profile officials to repeat these smears on the day that a video emerges appearing to show government employees, i.e. soldiers, practising blowing the Labour leader’s head off, is beyond irresponsible. In fact, it shows that it’s the Conservatives who are fundamentally ‘not fit to govern’.