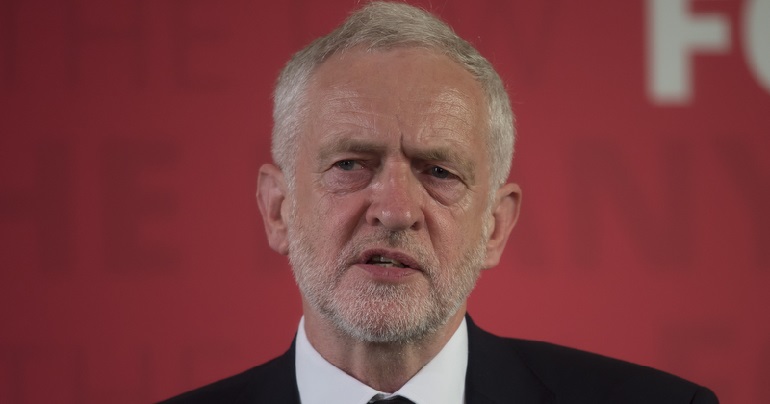 We urgently need to talk about Jeremy Corbyn’s record on chemical weapons. Because far from being weak on the matter, he has consistently led the way.

Corbyn’s mature response to the Salisbury poisoning has even impressed some of his opponents. But amid preposterous media propaganda aimed his way in the wake of the event, now is the perfect time to hammer home where he has always stood on chemical weapons.

A long record of campaigning against chemical weapons

Parliamentary records show that Corbyn has consistently campaigned against chemical weapons – and the arms trade as a whole, for that matter. Few Conservative MPs can claim to have done the same.

In 1993, Corbyn signed an early day motion (EDM) calling for:

the complete elimination of chemical weapons, believing that they are hideous instruments of warfare and mass destruction which have caused unimaginable suffering to soldiers and civilians in both the developed and developing worlds

The motion called the Chemical Weapons Convention a “historic human achievement” and looked forward to “rapid universal adherence to the Convention”. It urged the Preparatory Commission to “make the verification regime an effective one, in order to ensure the strict and successful implementation of the Convention”. 84 MPs backed the motion. None of them were Conservatives.

And that motion was no anomaly. In 2005, Corbyn signed an EDM calling on the government to “lead a world-wide ban on chemical weapons, with all existing stocks being destroyed”. 75 MPs supported the EDM in total, including – you guessed it – zero Conservatives. Then, in 2006, Corbyn was one of only 47 MPs who signed an EDM calling on the government to commemorate “victims of chemical warfare in the past” and for the international community to “reprioritise” the Chemical Weapons Convention “to achieve further reductions”. One Conservative MP signed that motion. (Just to clarify, that MP was not Theresa May.) 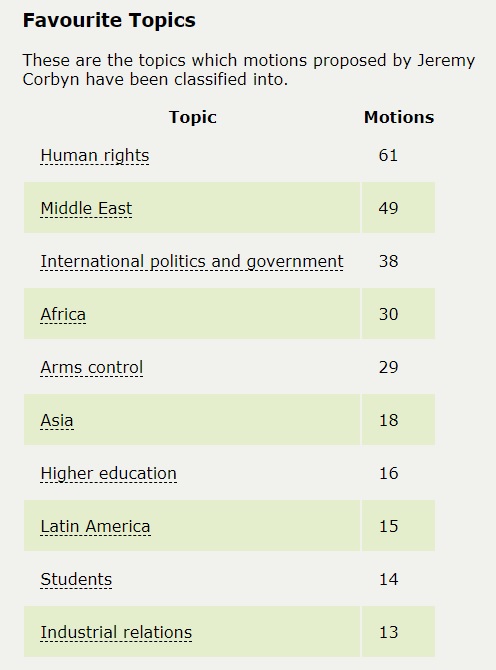 In a 1992 debate on arms exports to Iraq, Corbyn said:

Is my hon. Friend aware that, shortly after the Halabja massacre in 1988, I was part of a delegation, which included Kurdish people, to the Foreign and Commonwealth Office? We met the said Minister [of State], who expressed great disquiet about the gas attacks. However, when asked whether he would forthwith suspend all export credits, arms sales and trade with Iraq, he said that he would not, because trading interests came above considerations of our relationship with that tyrant.

In a 2013 debate on the same 1988 Iraqi mustard gas bombing of Halabja, Corbyn said:

although what happened in 1988 was genocide and was appalling, this country, to its shame, continued to sell arms to Iraq, and indeed took part in the Baghdad arms fair less than a year later

As Labour’s Ann Clwyd noted in the same debate:

In 1988-89 my hon. Friend the Member for Islington North (Jeremy Corbyn)… attempted to protest at the Iraqi embassy about the use of chemical weapons against the Kurds… We protested in this House in 1988, 1989 and throughout.

Corbyn said that he and Clwyd had been on a delegation “to both the Foreign Office and the Department of Trade and Industry to suggest that we should not take part in the Baghdad arms fair in 1989”. He continued:

We suggested that they should suspend all arms trade with Iraq and were rebuffed by Ministers on that occasion.

Corbyn on the Salisbury poisoning

Corbyn has won several peace prizes during his time as a politician. And his commitment to making peace even in difficult situations has long been clear.

He summoned precisely that spirit this week, insisting:

the public should also be able to expect calm heads and a measured response from their political leaders. To rush way ahead of the evidence being gathered by the police, in a fevered parliamentary atmosphere, serves neither justice nor our national security…

in my years in parliament I have seen clear thinking in an international crisis overwhelmed by emotion and hasty judgments too many times. Flawed intelligence and dodgy dossiers led to the calamity of the Iraq invasion. There was overwhelming bipartisan support for attacking Libya, but it proved to be wrong. A universal repugnance at the 9/11 attacks led to a war on Afghanistan that continues to this day, while terrorism has spread across the globe.

While he called on Russia to “be held to account on the basis of the evidence”, he also said:

let us not manufacture a division over Russia where none exists. Labour is of course no supporter of the Putin regime, its conservative authoritarianism, abuse of human rights or political and economic corruption… However, that does not mean we should resign ourselves to a ‘new cold war’ of escalating arms spending, proxy conflicts across the globe and a McCarthyite intolerance of dissent. Instead, Britain needs to uphold its laws and its values without reservation. And those should be allied to a foreign policy that uses every opportunity to reduce tensions and conflict wherever possible.

Corbyn is right, and the media is wrong. Yet again.

Faced with Corbyn’s mature statement, the right-wing media acted like tantrum-fuelled toddlers, calling him “a Kremlin stooge” and “Putin’s puppet”. And all of this happened just a week after they had bombarded Britain with sympathetic adverts about known human rights abuser and alleged perpetrator of war crimes Saudi Arabia. Corbyn had simply called for an evidence-based approach and respect for international law. Theresa May’s government, meanwhile, is the one that just sold 48 Eurofighter Typhoon jets to Saudi Arabia for £5bn. But you’d be forgiven for thinking the opposite was true if you relied on the mainstream media for your information.

This is nothing new, though, unfortunately.

In 2003, the BBC praised the invasion of Iraq. Jeremy Corbyn, meanwhile, opposed it, saying:

"This will set off a spiral of conflict that will fuel the wars, conflict, terrorism and misery of future generations" – Jeremy Corbyn, 2003 pic.twitter.com/7OKgZjN37c

He was right. The cheerleading media was wrong. The war was an absolute disaster. And we’re still living with the horrific consequences today.

After the Chilcot Inquiry into the invasion, Corbyn spoke about how politicians had “misled” Britain and launched a war on a “false pretext”. And he insisted:

One of the three main pillars of my election as leader of the party… was for a different kind of foreign policy: to uphold international law; to seek peaceful solutions to international disputes; to respect the role, and the authority, of the United Nations; and always to treat war as absolutely the last resort.

Today, Corbyn is right, again. And the media is wrong, again. Now is not the time for ‘hasty judgments’ or forgetting past mistakes. It’s the time for mature reflection and sensible decision-making.

And if there’s anyone we can trust to do that, it’s the man who’s consistently campaigned against chemical weapons and in favour of international law.