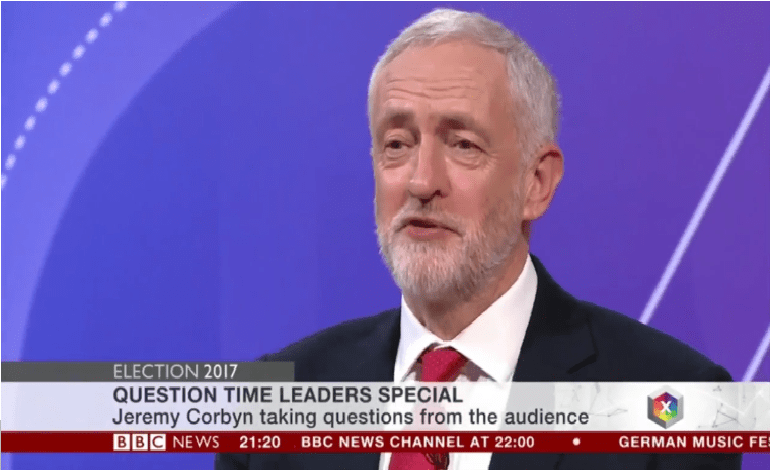 On the BBC Question Time election special, Corbyn turned the longstanding IRA smear campaign into the greatest case for him to be Prime Minister.

Theresa May has centred her election campaign on the Brexit negotiations. But the Labour leader showed that, beneath the smears, his involvement with the peace process in Northern Ireland actually makes him a great candidate for delivering Brexit:

Jeremy Corbyn tells it like it is – you don't make peace with your friends and you have to talk to both sides. #CorbynWins #BBCQT pic.twitter.com/dq1lBKmJB6

The two main party leaders have run very different campaigns. And the public will be watching to see who has the best skill set to negotiate Brexit. Corbyn began Question Time by pointing out that May has still refused to debate him head-to-head:

During May’s carefully stage-managed campaign, she has hidden from the public and journalists, while repeatedly refusing to debate opposition leaders. One of the most recent examples is May pulling out of every single BBC regional interview she was scheduled to attend. A BBC employee broke orders to inform people about the move after the BBC covered for the Conservative leader.

So many across the country are wondering where the so-called “strong and stable” leadership is. Sky News Political Correspondent Beth Rigby called May’s campaign the “most controlled” she’d ever seen. She keeps negotiation with her own electorate to an absolute minimum. So people are questioning how she will negotiate a decent post-Brexit deal with the EU.

Whereas Corbyn has received praise from even Sun journalists for his open, democratic campaign. Bolstering his negotiation credentials, the Labour leader received the Gandhi Foundation International Peace Award in 2013. He obtained the prestigious award in recognition of his “consistent efforts over a 30-year Parliamentary career to uphold the Gandhian values of social justice and non‐violence”.

On Question Time, Corbyn combated IRA smears and displayed his long history of negotiation experience. In contrast to May’s cowering, the Labour leader’s resilience has undoubtedly shone through this election. Whether it’s enough on election day depends upon ordinary people getting this message out there.