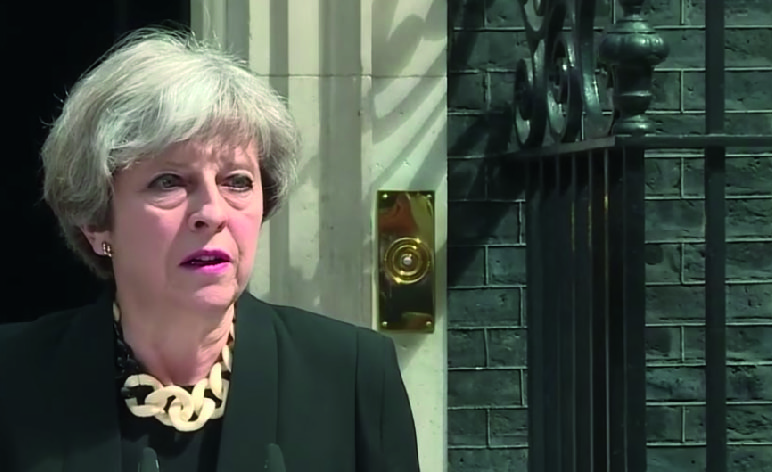 The Conservative Party has suspended campaigning until Monday 5 June following the London Bridge terror attack. But Theresa May has also given a speech on the attack that many have described as blatantly politicised. A speech that others have criticised for ignoring the fact she is the Prime Minister and was previously the Home Secretary for six years.

You can watch May’s speech in full here:

In the speech, she claimed there is “far too much tolerance of extremism” and that “enough is enough”. She also talked about how these attacks mean that the internet must be regulated.

While we have made significant progress in recent years, there is – to be frank – far too much tolerance of extremism in our country.

So we need to become far more robust in identifying it and stamping it out across the public sector and across society.

That will require some difficult, and often embarrassing, conversations.

But the whole of our country needs to come together to take on this extremism, and we need to live our lives not in a series of separated, segregated communities, but as one truly United Kingdom.

Several journalists saw her response as a continuation of campaigning:

This doesn't look like campaign suspension to me. Also remarkable from Home Secretary for 6 years. https://t.co/ToU6mmpcxF

Other people pointed out that May was essentially attacking her own record in office:

Couldn't agree more. We are allies with Saudis, worked with Qataris in Libya, & you, as Home Secretary, allowed free movement of extremists https://t.co/g1KVHEmrWS

Theresa May was Home Secretary for 6 years and authorised cuts to the Police, Armed Forces and Home Office

Tories have put Britain at risk

And some accused May of attempting to make people focus on anything but her:

People are also highlighting that the Home Office has recently sought to suppress an inquiry into terrorist funding because it highlights the role Saudi Arabia plays in funding terror. May is a strong supporter of Saudi Arabia and her government recently approved £3.5bn worth of arms export licences.

May said in her speech that our response to these attacks “will require some difficult, and often embarrassing, conversations”. The first of these “embarrassing conversations” materialised more quickly than she may have liked.