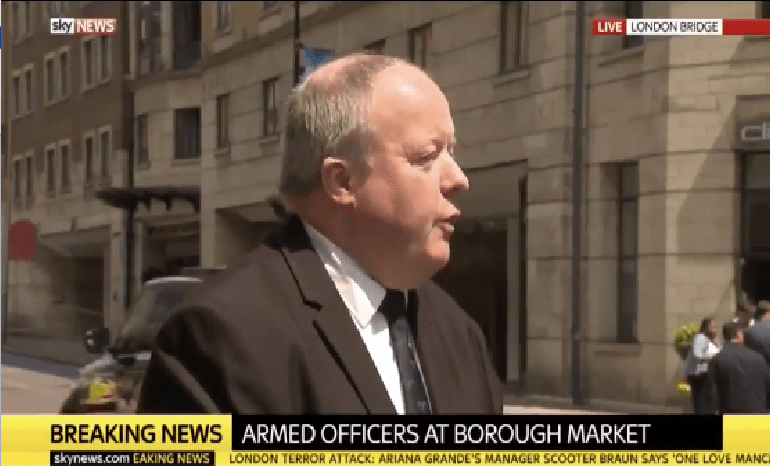 A former Senior Investigation Officer of the Metropolitan Police, Peter Kirkham, has accused Theresa May of outright “lying” to the public about the London attacks.

Towards the end of the exchange on Sky News, the interviewer asked:

Kirkham was responding to the London attacks. Seven people were killed and more than 40 injured when a van drove into pedestrians on London Bridge, and three assailants reportedly began indiscriminately stabbing people.

A report from the Institute for Fiscal Studies (IFS) backs up Kirkham’s position. The IFS investigation shows that Conservative austerity cut 20,000 police officers between 2009 and 2016. Total employment in the police force also fell by 17.4% during the same period.

On Twitter, Kirkham pointed out the importance of ordinary police for combating terrorism:

"Ordinary" police ESSENTIAL for knowing / monitoring those at risk of radicalisation,etc in their communities & for gathering intelligence >

In 2015, then Home Secretary May accused the Police Federation of “crying wolf” over its concern about the impact of police cuts. But a recent report from Her Majesty’s Inspectorate of Constabulary (HMIC) joins the chorus suggesting otherwise. According to the report, the Conservative government’s austerity programme has left policing in England and Wales in a “potentially perilous state”.

It will make Britain more vulnerable to terrorism. It will damage the police’s ability to counter terrorism if neighbourhood policing is cut. It will lead to a loss of intelligence, a loss of confidence and trust.

Former senior Metropolitan Officer Kirkham was unequivocal: he claims May is lying outright about the police response to the London attacks.

What is certainly clear is that there have been huge cuts to policing since the Conservatives took power. And a number of experts are saying that this puts the UK at higher risk of a terrorist atrocity.