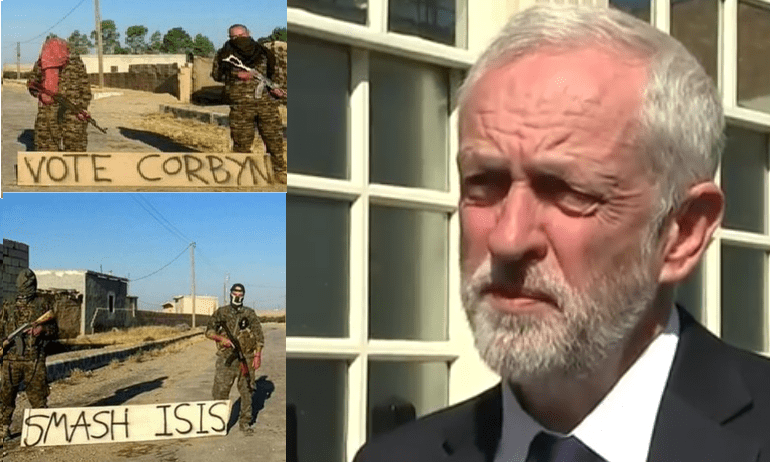 The members of the Kurdish-led People’s Protection Units (YPG) and its International Freedom Battalion said the Labour leader was the best option for combating terrorism:

Literally the only people effectively fighting ISIS know Corbyn is not a danger to our security 😎 pic.twitter.com/y7zRCilfHG

The group backed the Labour leader’s assessment of terrorism:

Only Jeremy Corbyn knows the way to stop Isis – through a foreign policy that cuts off their funding and supplies at the source.

After the Manchester bombing, Corbyn made an important speech. While the candidate for prime minister made clear that his assessment “in no way reduces the guilt” of terrorists, he said:

In their statement, the group had a damning verdict for Theresa May:

The longer Theresa May is Prime Minister, the less safe everybody is, both here in Syria and back home in the UK.

One of the issues the group is referring to is the possible role the government is playing in funding terrorism. Recently, the Home Office tried to suppress an inquiry into terrorist funding because it highlights the role Saudi Arabia plays in funding terror. May is a strong supporter of Saudi Arabia and her government recently approved £3.5bn worth of arms export licences.

Along with her toffee-nosed millionaire colleagues in the Conservative Party, she has brought nothing but instability to this region

The British volunteers are on the front line in the fight against Daesh, alongside local troops supported militarily by the US-led coalition. They also praised Corbyn for backing them:

Only he has been outspoken in his condemnation of the oppression of Kurds in the Middle East at this crucial time, with the Kurdish-led Syrian Democratic Forces about to defeat Isis in their capital of Raqqa.

When reporting this story, Indy100 referred to Corbyn’s speech on terror as ‘controversial’. But that’s far from the case. The Labour leader’s point is not controversial at all. Rather, his assessment echoes the concerns of many in the UK intelligence community.

Take the verdict of ex-MI5 boss Eliza Manningham-Buller, for example:

whatever the merits of putting an end to Saddam Hussein, the war… increased the terrorist threat by convincing more people that Osama Bin Laden’s claim that Islam was under attack was correct… our involvement in Iraq spurred some young British Muslims to turn to terror.

Another former MI5 chief, Stella Rimington, said to “ignore the effect of the war in Iraq” on radicalisation “is misleading”.

Or take the Joint Intelligence Committee, which warned Tony Blair in 2003 that invading Iraq would increase the risk of terrorism in the UK:

The report specified that terrorist attacks in the UK were “especially” likely “for maximum impact”.

Straight from the front-line in Syria, members of the YPG and its International Freedom Battalion did not mince their words. They have called for the election of Corbyn as the best way to end the terrorism they are directly fighting against. For the group, continuing May’s premiership is a threat to the safety of people at home and abroad.