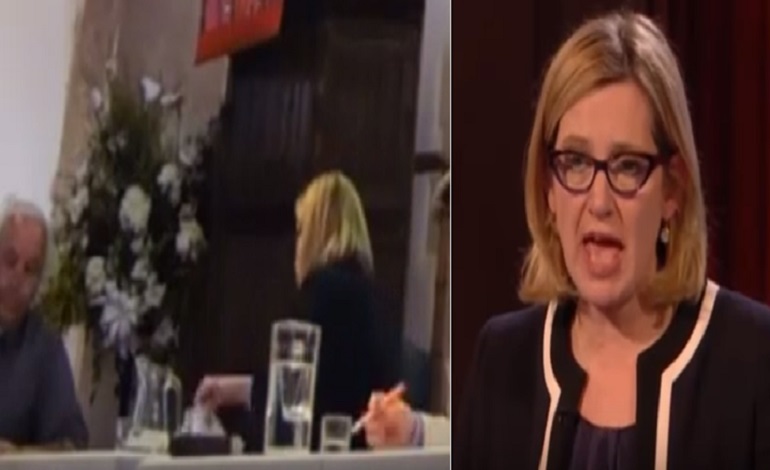 Home Secretary Amber Rudd tried to shut down a debate about the Manchester bombing, the Conservative Party’s links to Saudi Arabia, and terrorism. But it was caught on film. And the man at the centre of the storm has told The Canary that Rudd tried to silence him because the subject is so “sensitive” to the Tories.

Nicholas Wilson is an anti-corruption campaigner. And he is also standing as an independent parliamentary candidate in Hastings and Rye, against Rudd. At a hustings on 3 June, Wilson was discussing Theresa May’s links to Saudi Arabia and HSBC bank, but also how the Saudi kingdom itself is linked to international terrorism – especially in relation to the Manchester bombing.

But moments after Wilson started, Rudd can be seen writing on a piece of paper. She then handed the note to the Chair of the hustings, who immediately tried to stop Wilson talking:

Following this, the Chair of the meeting forced Wilson to stop and hand him the microphone:

Rudd shut me down because I was broaching two subjects the Tories are very sensitive about: HSBC and arms sales to Saudi Arabia, and their connections to each. As I’ve been disclosing for years, the Tories are up to their necks in HSBC corruption. And, until April, two top people at the BBC were also an HSBC Director [Rona Fairhead] and Chairman of BAE Systems [Roger Carr].

As The Canary previously reported, Wilson has detailed May’s potential conflict of interest regarding her husband Philip and HSBC, and also her promoting of investment in Saudi Arabia.

May’s husband Philip works for US investment firm Capital Group. The company works closely with HSBC, just recently establishing a partnership in Hong Kong. So when it was announced that HSBC had been selected to advise Saudi Arabia on the sale of its state oil company Aramco, Wilson looked into this.

And he found that, in April 2017, Theresa May had gone to Saudi Arabia and had a meeting with Aramco Chairman Khalid Al-Falih. Additionally, only one British businessman attended any of May’s meetings in Saudi Arabia. He was Sir Xavier Rolet, the CEO of the London Stock Exchange. Wilson told The Canary:

It seems obvious to me that the PM is simply lobbying in secret on behalf of her husband, Philip. But also for HSBC and the London Stock Exchange. And, of course, the Tory Party. Serious questions need to be asked.

But it’s the question of UK arms sales to Saudi Arabia, and the kingdom’s links to terrorism, which in the current climate is more pertinent. For example, as The Canary previously reported, former US President Barack Obama tried to stop US citizens from suing the Saudi government for damages related to 9/11, in spite of 15 of the 19 hijackers having come from Saudi Arabia.

And there’s also the issue of al-Qaeda and Daesh (Isis/Isil) being driven by the Saudis’ fundamentalist state ideology of Wahhabism. Because there have long been widespread concerns about the Saudi regime spending huge sums promoting and exporting this ideology. And some believe that Daesh, the group which claimed responsibility for the Manchester bombing, is also funded and supported by Saudi Arabia. Although this has never been proven.

I don’t think Britain should be conducting any trade with Saudi Arabia. But the problem with neoliberal politics is money is king. So, human rights and ethics are seriously neglected.

In the wake of firstly the Manchester bombing, and now the London attacks, more questions appear than answers. And while there needs to be discussion about the foreign policy implications of these horrific attacks, the question of Saudi Arabia is more clear cut. The UK government should suspend all arms licences to the kingdom with immediate effect, and should conduct a full review of our “relationship” with the country. But judging by Rudd silencing debate on this issue, it’s a subject the Tories have no interest in talking about.

The Canary approached Amber Rudd for clarification of her actions but received no response.