BREAKING: Jeremy Corbyn joins calls for Theresa May to resign over police cuts in wake of serial terror attacks [VIDEO] 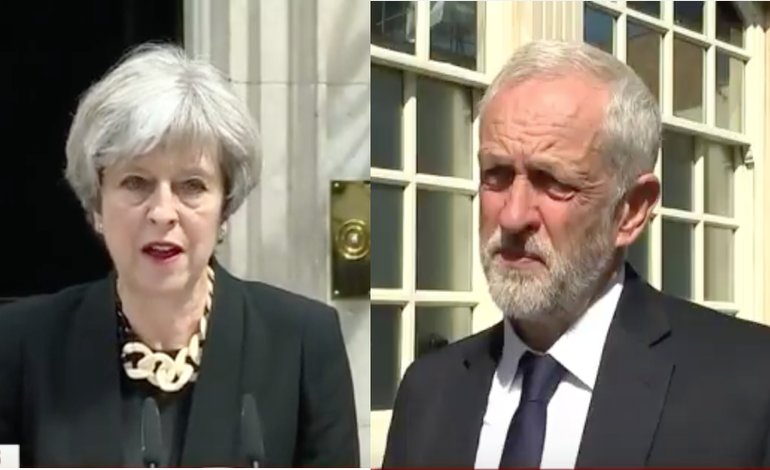 Labour leader Jeremy Corbyn has joined calls for Theresa May to resign over the police cuts which took 20,000 police officers off the streets prior to a series of terror attacks on UK soil.

Since May became Home Secretary in 2010, she has delivered major cuts to police forces across the country. And as a result, there are now 20,000 fewer police officers in the UK than there were in 2009. That is a 14% drop in less than a decade.

A briefing from the Association of Police and Crime Commissioners states that planned budget cuts will hurt even more. Its analysis suggests that police staffing levels could fall by a further 17% to approximately 100,000 by 2020 – the lowest level since the mid-1970s. The government will also cull civilian posts, requiring remaining officers to fulfil back office roles too.

Yet, in the wake of the third terror attack on UK soil in three months, the Prime Minister is continuing to insist that these cuts never happened. This led to the unprecedented intervention of a former Senior Investigation Officer from the Metropolitan Police, Peter Kirkham. During an interview with Sky News on Sunday 4 June, Kirkham accused May of outright “lying” to the public about the London attacks. Towards the end of the exchange on Sky News, the interviewer asked:

Kirkham’s decision to break ranks has triggered an avalanche of support from others. High profile leaders from across political and security circles are today calling for Theresa May to resign over her police cuts. David Cameron’s former Director of Strategy Steve Hilton, who worked for Cameron in the coalition government, took to Twitter on Monday 5 June to call for May to quit. He said:

She is more responsible for UK’s current security set-up – and its failures – than anyone else… who is in the end politically responsible/accountable? she was in charge last 7yrs [sic]…  I think her spin and carefully crafted language masks the reality that she doesn’t know what she is doing…

In an interview with ITV News, Labour leader Jeremy Corbyn was asked if he would back the calls for May to quit. He responded:

Indeed I would, because there’s been calls made by a lot of very responsible people on this who are very worried that she was at the Home Office for all this time, presided over these cuts in police numbers and is now saying that we have a problem – yes, we do have a problem, we should never have cut the police numbers.

At a campaign event in London, the Prime Minister continued to deny the cuts had happened at all, saying:

We have protected counter-terrorism policing budgets, we have funded an uplift in the number of armed police officers.

However, her own Culture Secretary was saying the opposite in media interviews. Culture Secretary Karen Bradley was repeatedly pressed on police numbers in an interview for Good Morning Britain. Her attempts to avoid answering immediately went viral.

In a later interview on BBC Radio 4’s Today programme, Bradley was forced to admit that: “We’ve seen reductions in police numbers across the board”. She added: “We had to take difficult decisions in 2010 when we came into office. When as you remember there was no money.”

If only someone had given Karen Bradley this chart, she could have answered the question on whether the number of armed police has been cut pic.twitter.com/qP6Sy4aUbs

Bradley argues that there “was no money” for the police and security services since 2010. Yet, the Conservative government has been providing an annual taxpayer handout to corporations of £93bn a year since coming into office. That’s more than the annual cost of the entire education system (£59.2bn), all housing-related benefits (£27bn) and unemployment benefits (£3bn) combined.

Theresa May is right when she says ‘enough is enough’. This country has certainly had enough of being told that there is no magic money tree for critical public services – even police and counter-terrorism. When all the while, the Conservative government is shaking the taxpayer piggy bank to shower every last penny on already-wealthy individuals and corporations in corporate welfare. If May fails to resign over this failure, the public can always sack her themselves on Thursday 8 June.