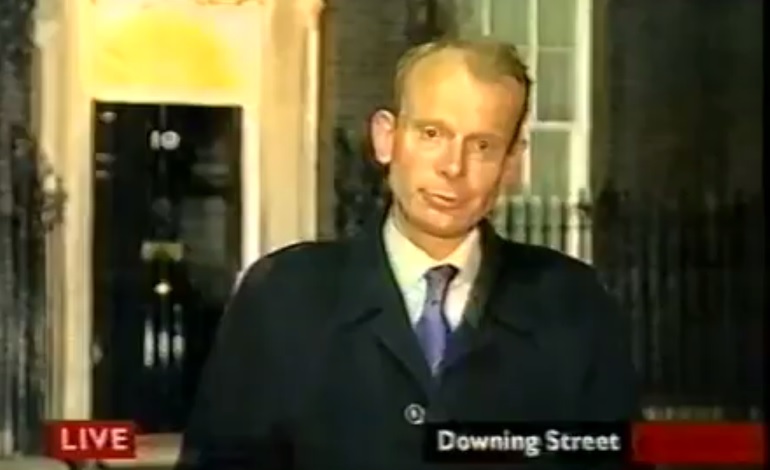 An uncomfortable video of the BBC‘s Andrew Marr resurfaced on 26 May. It appeared as Labour leader Jeremy Corbyn faced a political and media backlash for saying there’s a link between the UK’s foreign policy and its terror threat.

On BBC Breakfast, Security Minister Ben Wallace denied any connection, and told Corbyn he should “get his history book out”. But the excruciating BBC video, from a moment in its history, reminds us how cautious we should be about taking the media’s word – or indeed that of politicians – on such matters.

Cheerleading from the BBC

The BBC recorded the news segment after ex-Prime Minister Tony Blair had launched his invasion of Iraq. Blair carried out that assault, which led to a lengthy military occupation, despite millions of people showing their opposition to the invasion at protests. Blair stood strong against “the drift of public opinion”, though, Marr explained. And the BBC correspondent had a message for any Blair critics that remained:

Marr said it would “ungracious” of these critics to not accept that “he [Blair] stands as a larger man and a stronger Prime Minister as a result”.

The truth will out

Fast forward to 2017, and many people see Blair as one of most reviled men in Britain. Because we now know the cost of that war. It cost the lives of around one million Iraqi civilians, and those of many British military personnel. It also cost UK taxpayers billions of pounds.

We now know that Blair used dodgy intelligence to justify the invasion. And as even Blair would eventually acknowledge, the rise of Daesh (Isis/Isil) was a direct consequence of the conflict.

In its entirety, it was a catastrophic sham.

In 2006, meanwhile, ex-Prime Minister David Cameron said of the invasion that “the threat to this country is actually greater than it was before it began”. That’s also what the UK’s Joint Intelligence Committee told Blair in a February 2003 memo – before he launched the invasion. The Ministry of Defence agreed. And ex-MI5 chief Eliza Manningham-Buller said the Iraq invasion categorically “increased the terrorist threat”.

But now that Labour leader Jeremy Corbyn is saying the same thing, many in the media – and politicians like Ben Wallace – are on the attack. The serious misjudgement we’ve seen from the media and politicians in the past, however, shows that their views should not be swallowed without question.

The BBC, however, has moved on somewhat from 2003. In April, Marr confronted Theresa May over the invasion of Iraq, saying that Corbyn’s opposition to the war was “right” and May’s support for it was “wrong”. Daily Politics presenter Andrew Neil has also urged politicians to have a “mature debate” about terrorism in the general election campaign:

It takes courage, but many are coming to the realisation that our approach to terrorism needs examination. pic.twitter.com/tKVsz70rC9

Neil is right. We do need a “mature” conversation about this “life and death” issue. And we need look no further than at the decisions of the media (including the BBC) and politicians in the past to show how disastrous it can be if we don’t.