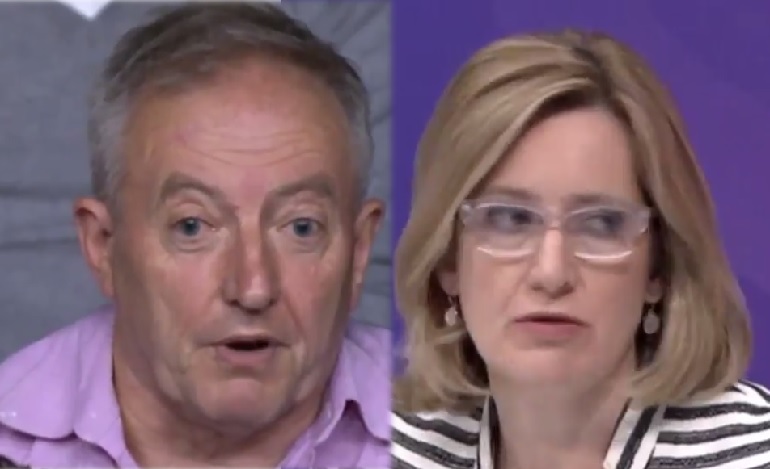 On BBC Question Time on 25 May, one audience member unravelled the entire Tory position on policing in less than a minute. And Home Secretary Amber Rudd was left floundering away from the truth.

“Does the government not expect this?”

Reacting to the 22 May terrorist attack in Manchester, the audience member said:

In 2015, Theresa May was then Home Secretary… [She] addressed the Police Federation and told them that they were scaremongering, because she was reducing the police numbers and community policing. And the Police Federation said at the time that low level intelligence is what gives them the information, and it’s able to feed those on to the intelligence services about terrorist activity. And we’re now 20,000 police officers down, and we get atrocities like this. Does the government not expect this?

The Conservatives’ austerity programme has cut police numbers across the UK since 2010. There are now around 20,000 fewer police officers than there were in 2009. This, according to Her Majesty’s Inspectorate of Constabulary (HMIC), has left policing in England and Wales in a “potentially perilous state”. And just recently, one Yorkshire police officer told current Home Secretary Amber Rudd:

There are not enough cops to deal with demand

‘Nothing to see here. Don’t panic.’

Amber Rudd, who was a Question Time panellist, responded to the audience member by saying:

I have asked the head of counter-terrorism whether it is about resources. It is not.

But there is a massive question surrounding resources. And while we don’t know what the head of counter-terrorism told Rudd, we do know what the police have said.

In 2015, police told Theresa May that forces had been cut so much that they’d find it harder to respond to a major attack on UK soil. And they said the army would have to be brought in for support. But May claimed the assembled officers were “crying wolf”, arguing:

you can’t reduce 17,000 police officers and expect nothing to change. While police are well-versed at contingency planning, the levels of cuts to officers means that we cannot police events in the same way.

Just two years later, police forces don’t have the numbers to conduct the extensive patrols required as the UK terror threat reaches ‘critical’. In the wake of the Manchester bombing, the armed forces are now on the streets. And in a statement on 24 May 2017, Police Federation Chair Steve White explained how austerity cuts underpin calling in the troops:

There is no ignoring the fact that we, the police, simply do not have the resources to manage an event like this.

And as The Canary has reported previously, it’s not just the police who’ve been suffering under Tory austerity:

Back on Question Time, Rudd said:

There may be a conversation to have about policing. We may have that at some stage. But now is not that conversation.

In other words, ‘please don’t talk about police cuts now – there’s an election coming up’. But the fact is that we need a very serious chat about properly resourcing the people who protect the British public. And what better time to talk about this than in the run-up to a general election?

Jeremy Corbyn’s Labour Party has consistently asked the Conservatives to give the country’s police forces “the necessary resources to do the job”. Prime Minister Theresa May, meanwhile, has insisted that police budgets are safe and that police have adequate resources. But police officers say otherwise. As do the figures.

The current Conservative manifesto shows no costed plans to boost the resources of a police force that has already lost around 20,000 officers due to Tory austerity measures. And if the Conservatives return to power, police staffing levels could reduce by a further 17% by 2020, according to analysis from the Association of Police and Crime Commissioners. Labour, on the other hand, has pledged to recruit an extra 10,000 police officers.

In other words, there’s a clear choice for the British people on 8 June. Give the people who defend us adequate resources. Or don’t.