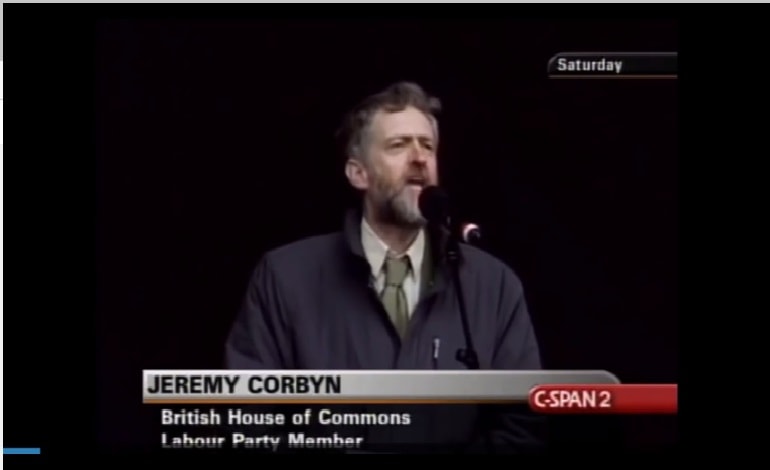 An old video clip of Jeremy Corbyn has gone viral in the wake of the 22 May Manchester bombing. Because in just 23 seconds, the current Labour Party leader summed up how many people appear to feel about cyclical war and terror:

"This will set off a spiral of conflict that will fuel the wars, conflict, terrorism and misery of future generations" – Jeremy Corbyn, 2003 pic.twitter.com/7OKgZjN37c

At one of the biggest protests in UK history in 2003, Corbyn said:

Thousands more deaths in Iraq will not make things right. It will set off a spiral of conflict, of hate, of misery, of desperation that will fuel the wars, the conflict, the terrorism, the depression, and the misery of future generations.

Corbyn seems to be on the right side of history. The 2003 invasion of Iraq led to the death of around a million Iraqis, sowed destruction throughout the country, and gave the forerunners of Daesh (Isis/Isil) fertile ground to grow. It also paved the way for the high levels of terrorism we see today, and created the regional destabilisation that eventually led to today’s refugee crisis.

The invasion was based on Tony Blair’s ‘dodgy dossier’ – a fabrication paraded as conclusive evidence across the media. And while Corbyn voted against his own party to oppose the war, Theresa May supported Blair. And as even Blair would eventually acknowledge, the rise of Daesh was a direct consequence of the conflict he and May voted through parliament.

As well as opposing the invasion of Iraq, Corbyn was one of just 13 MPs to vote against military action in Libya. A parliamentary report on the 2011 military intervention in Libya later vindicated Corbyn’s decision, concluding:

The limited intervention to protect civilians had drifted into an opportunist policy of regime change. That policy was not underpinned by a strategy to support and shape post-Gaddafi Libya.

Within its damning report, the foreign affairs committee concluded that the risk of extremist groups like Daesh benefiting from the rebellion should not have been “the preserve of hindsight”. Especially given the rise of terrorism following the 2003 invasion of Iraq.

Shadow Chancellor John McDonnell also voted against the war. For Corbyn’s closest ally, the risk of increasing terror was not the ‘preserve of hindsight’:

I believe we now face the prospect of a long-haul engagement in military action in Libya… and then vulnerability to a lengthy terrorist campaign. It all threatens the peace and stability of the region, then the consequences it will have for our own people and the global economy.

Military interventions without a clear endgame fuel terrorism abroad and at home. The political establishment had no endgame for post-regime change in Iraq or Libya. Nor do they have a plan for if they remove Bashar al-Assad in Syria today. Given the Conservative Party’s unflinching support for Donald Trump, we must be careful that history does not repeat itself yet again.

No doubt those sharing the old video clip of Corbyn would also like the UK to stop participating in the cycle of war and terror.