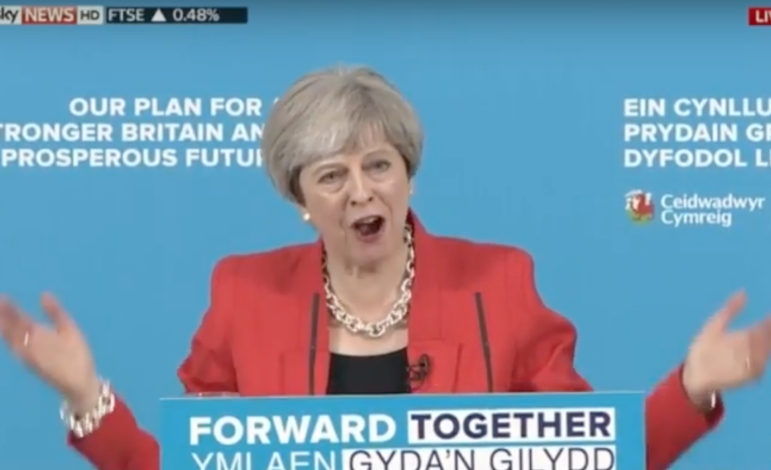 The Conservative Party has faced criticism for its uncosted manifesto. But even where costings are provided, doubt remains. Because findings have revealed that the proposal to end free school lunches and replace them with breakfasts is budgeted at just 6.8p per child per meal. And now, the Conservatives have had to perform another major U-turn and backtrack from the figure. So it is now yet another manifesto pledge that is totally uncosted.

Theresa May, the dinner snatcher

May was labelled a dinner snatcher after the manifesto launch. Currently, children receive free school lunches for the first three years of primary school. But the manifesto [pdf] states that the party does not see this as “a sensible use of public money”.

Free school lunches cost approximately £600m a year. But according to a press release from the Conservative Party, reported in Schools Week, only £60m has been allocated for breakfasts. This works out at less than 7p per meal for the 4.62 million state primary school children in the country.

The benefits of free school lunches include getting children to eat healthier, more nutritious meals. Before the plans were introduced, a pilot study showed that:

There was a 23% increase in the number of children eating vegetables at lunch and an 18% drop in those eating crisps.

Also, that the result of free school meals was that:

students were found to be on average 2 months ahead of their peers elsewhere.

There is now good evidence that school breakfasts are at least as effective in helping children to make progress in school.

But this certainly isn’t going to happen on a budget of 6.8p per child. Aisling Kirwan, the founding director of the Grub Club, claimed that even providing children with porridge would cost 25p a portion. And that:

Clearly there’s a huge disparity between the realistic costing and that put forward by the Tories.

But even the Tories now seem to realise that 6.8p for a breakfast is impossible, even by their penny-pinching standards. And now, the party is trying to distance itself from the figures it originally published. It stated that the cost:

will vary depending on how many pupils at any given school take up this offer.

According to analysis from Education Data Lab, which included a costed evaluation of breakfasts at 25p and also staffing costs, the real figure could be around £174m a year. A huge difference from the £60m originally stated. And that is based on only 20% take-up. If the scheme proved more popular, it could drastically increase in cost.

This is another example of Theresa May and her party looking extremely weak and wobbly with their manifesto costings. May has already backtracked by introducing a consultation on capping the ‘dementia tax’. And she is categorically refusing to set the threshold above which pensioners will lose their winter fuel allowances.

And now, she is stealing school lunches and replacing them with an unfunded alternative. Meanwhile, Jeremy Corbyn has promised to introduce free school meals for all primary school children, funded by charging VAT on private school fees.

Not only is Theresa May coming after the youngest and the oldest in our society, she is doing it in a totally uncosted way. This is not strong and stable leadership. This is a shambolic mess.