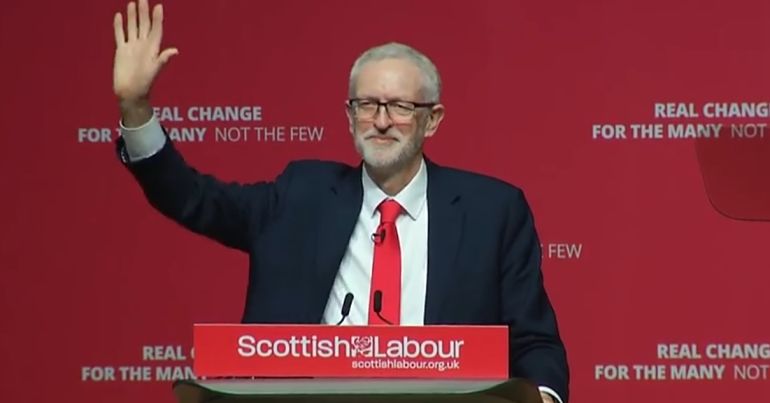 The British army is reportedly investigating after a video emerged of soldiers apparently using an image of Jeremy Corbyn’s face for target practice. The now deleted video appears to show soldiers simulation rounds at an image of the Labour leader.

Let's see how the press play this… pic.twitter.com/9fzJtlisRD

Couple of more magazines would be favourable

Sky News believes that the video was taken in Kabul, Afghanistan. Bunkall quoted an army spokesperson:

We are aware of a video circulating on social media, this behaviour is totally unacceptable and falls well below the high standards the Army expects, a full investigation has been launched.

This video is terrifying. It's been circulating on Twitter since last night, and shows what appear to be serving soldiers using a picture of Jeremy Corbyn for target practice. Deeply, deeply dangerous in this political moment. https://t.co/3vlhD6IcTK

The video that is being circulated of a picture of Jeremy Corbyn’s face being shot at by @BritishArmy soldiers is disgraceful. It is the result of the war waged against him by the Tory party and the right wing press, who have shamelessly slandered and libelled him. Shame on them.

“Attack on our democratic process”

The footage comes shortly after the conviction of John Murphy for assaulting the Labour leader. Chief magistrate Emma Arbuthnot sentenced Murphy to 28 days in prison on 25 March. She said:

An attack like this is an attack on our democratic process. This is a public servant and attacks on MPs must stop. The message must go out – this must stop.

CCTV footage shows Murphy hitting Corbyn on the side of the head while holding an egg at the Muslim Welfare House near Finsbury park.

And there is further context to the army video. A far-right terrorist murdered Labour MP Jo Cox on 16 June 2016. And terrorist Darren Osborne wanted to kill Labour leader Corbyn. A judge sentenced Osborne to life in prison for driving a van into a crowd of Muslim people at Finsbury Park shortly after the 2017 general election.