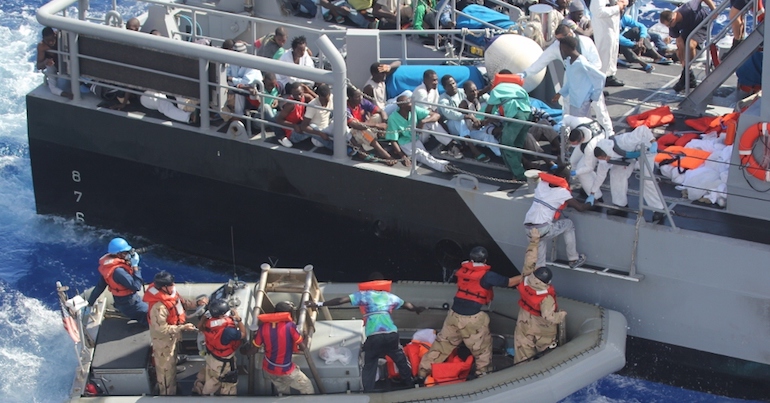 Thousands of people risk drowning in the Mediterranean because voluntary rescue boats have been deliberately grounded. The Maltese and Italian governments have started to push increasingly harsh anti-immigration policies. As the Guardian reported:

Since 26 August, no NGO [non-governmental organisation] rescue vessel has operated on the main migration routes between north Africa and southern Europe.

This means that the risks facing those fleeing civil war, famine and persecution have greatly increased. The Canary spoke to volunteers from one of the rescue boats. In no uncertain terms, they said this “politicised decision” will kill people.

According to the UN’s latest figures, 77,317 people (refugees and asylum seekers) have arrived in Europe by sea in 2018. But it also estimates that 1,642 people are dead or missing. The Missing Migrants project estimates that 1,723 people have died in the Mediterranean this year.

But since this clampdown on rescue boats, the situation is declining fast. It’s highly likely that many more people have died who don’t appear in these figures. But based on the deaths that are recorded, the chance of dying while trying to cross from Africa to Europe has tripled.

Brendan Woodhouse and Dan Bebawi have both volunteered in rescue operations organised by Sea-Watch. As Woodhouse said:

The criminalisation of humanitarian sea rescue is a conscious and malicious political decision to allow human beings to drown, in order to deter other people from seeking international protection on European soil.

on a staunchly anti-immigrant platform, vowing to “put Italians first” and send half a million undocumented migrants “home”.

But as Bebawi explained to The Canary, these so-called ‘migrants’ have fled complex political situations in Africa. They include huge numbers of unaccompanied minors; the youngest that Bebawi helped to rescue was only twelve years old.

Bebawi explained that Sea-Watch 3 is currently detained in Malta along with two other rescue boats. There are another seven Mediterranean boats out of action and several were forced to leave the area.

What makes this even more complex is that there’s no formal, or legal, charge against Sea-Watch (or the other boats) so it’s impossible for them to challenge this. Yet, if they leave Valletta to continue with rescue missions they face arrest. But as Bebawi stated:

Sea rescue is not a crime; it’s an obligation. No one should be stopped from saving lives.

As the UN reported, since August, although there are fewer arrivals in Italy, there’s a “far higher death rate” and rescue boats “continue to face uncertainty”.

Most people try to cross from Libya. Whilst Italy may refer to them as ‘migrants’, first and foremost, as the UN states, these are people “in need of international protection”. As Bebawi, explained whilst volunteering on Sea-Watch he helped rescue hundreds of people who had fled civil war in Sudan, or the increasingly volatile political crisis in Libya. Warring militia ‘trade’ people as slaves for up to two years before they even make it on to a boat. Yet, as Bebawi explained, “Libya is more terrifying than the sea”.

And Bebawi said these boats aren’t equipped to face the 900-mile journey from Libya to Italy. Militia, who control slave labour and people smuggling markets, charge vast sums for flimsy boats without enough fuel to make the crossing. There are no maps or navigational equipment and people don’t have enough water to survive the journey.

“The silence from our politicians is murderous”

Volunteers who’ve worked in the area have absolutely no doubt that for people facing the journey, a perilous sea crossing is infinitely better than the horrors they’ve left behind. But without the rescue boats, thousands more people will drown.

It doesn’t have to be this way. As Woodward stated, other European governments –  including the UK – have been silent:

Matteo Salvini’s promise to close down humanitarian rescue all summer long had been deliberately enacted and supported by every European country.

And the silence from our politicians is murderous. It’s beyond complicit. They’re completely a part of this strategy to drown people and to make them suffer to keep them away.

There’s also been very little coverage of this situation in the UK media. As Bebawi told The Canary, he found the “total lack of media coverage” about the ongoing crisis “striking”. The UK media and government are complicit through silence – they must take action to stop any more deaths immediately.

– Read more Canary articles about the refugee crisis and migration.