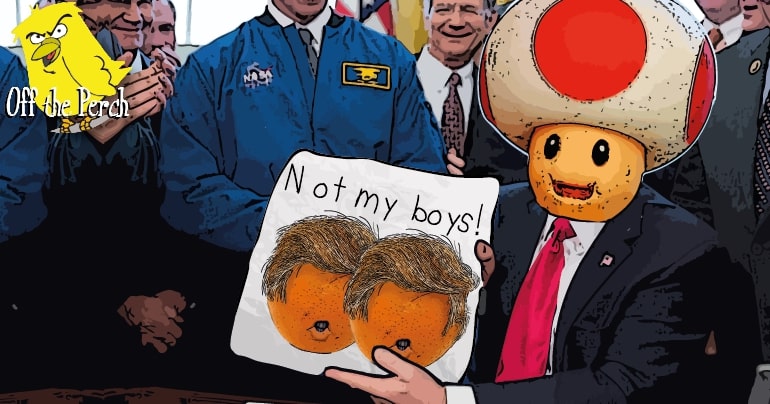 a dick like the mushroom character in Mario Kart.

Meanwhile, over in Super Mario World, President Toad has faced a similar accusation. Namely that his ballbag looks like a couple of Trumps from the Mario-universe video game Super Collusion Bros.

Egg on his face

President Toad allegedly had an affair with Birdo – the wife of Yoshi:

Toad denied the allegation, but he was also recorded saying:

You ever been with a broad who can regurgitate eggs at will? It’s a wild scene, man.

Birdo has since gone on to claim that President Toad’s:

ballbag looks like a couple of shrivelled oranges with gelled rat fur glued on them – like that Trump guy from Super Idiot Kart.

Of course, having a somewhat misshapen penis might be the most human thing about Trump. Ridiculing him may seem deserved as he’s a truly atrocious human, but let’s not forget who the real victims are in this story: people who play as Toad in Super Mario Kart.

Oh, and everyone who’ll perish in the nuclear war Trump starts to deflect attention, obviously.