Figures released by the Department for Work and Pensions (DWP) show that a whole group of women, already hit by one benefit reform, are now losing out on another vital welfare payment. But delve deeper, and DWP stats also show that some of these women are ending up worse off than others.

The DWP: cutting some more

As the government describes:

Essentially, the DWP will give the winter fuel payment to most people over the age of 65 in receipt of a state pension or certain other benefits. But on Tuesday 18 September, the DWP released the figures for the number of people getting the payment in 2017/18. They show that since 2010/11, almost a million fewer people are getting it in Great Britain (some people can claim it abroad): 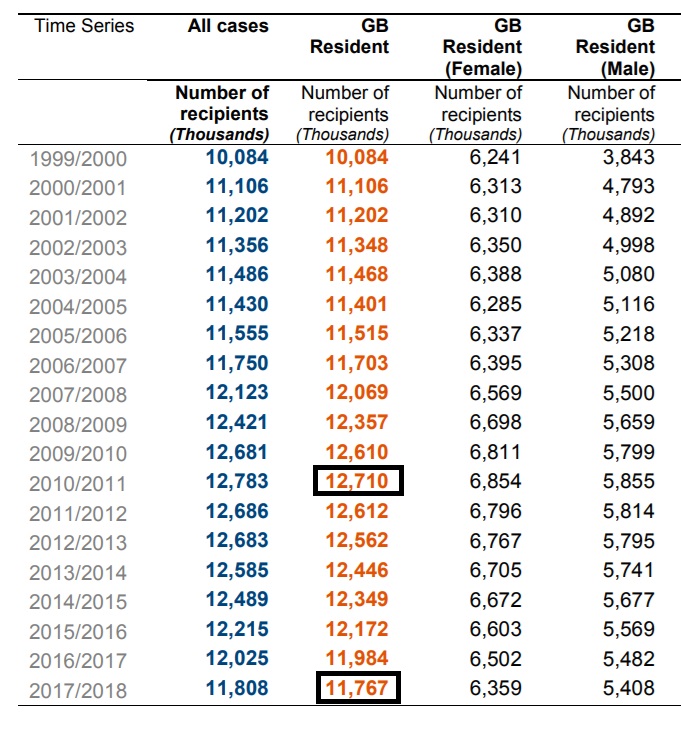 The total recipient figures and those for GB increased from 1999/2000 to 2010/11; since then they have decreased. This is due to the rise in women’s State Pension age.

As The Canary previously reported, the 1995 Conservative government’s Pension Act included plans to increase women’s state pension age to 65, which is the same as men’s. But the government did not contact the women affected until 2009 – 14 years later. At first the government planned to slowly phase the reforms in. But in 2011 the then-chancellor George Osborne decided to speed up the process by several years.

As a result of these reforms, thousands of women born in the 1950s (on or after 6 April 1951) have seen their retirement age increase by up to six years. It has meant that women cannot claim their pension until 65 from November 2018 and until 66 from October 2020.

And consequently, hundreds of thousands are also losing out on the winter fuel payment. But what’s happening to these women? Some other DWP figures may have the answer.

Between February and August 2017, the number of women aged 55-64 claiming benefits increased by 44,290. Most of this increase (39,580) was women aged 60-64. While the DWP does not comment on the reason for this increase, it’s reasonable to assume part of it is down to women not getting their pensions, and therefore going onto other benefits. But of course, the DWP will also now have denied them the winter fuel payment.

This perfect storm means the DWP has effectively abandoned a whole generation of women; leaving them stuck on benefits they never expected to be on. And with winter on its way, the fact that so many may be struggling to heat their homes is a damning indictment of the system.

The Canary asked the DWP for comment, but it had not responded at the time of publication.