The government is a step closer to debating a scandal affecting millions of women. Theresa May could be toast. - The Canary 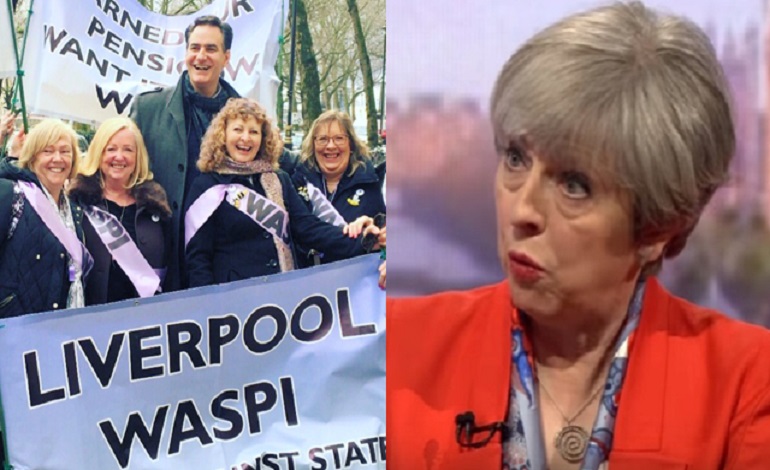 Millions of women have just pushed the government into a corner over a scandal that has been brewing for years. The Conservatives could now face a debate in parliament over the issue. And if they do, it could end in yet another humiliating defeat for Theresa May.

Labour MP Grahame Morris has been running a petition for the Women Against State Pension Inequality (WASPI) group. On 28 October it cleared over 100,000 signatures. This means that the government has to decide whether parliament will debate the petition or not. And if it happens, the DUP has already said it would vote against the Conservatives. The challenge is that any vote would not be binding, although campaigners are hoping it would humiliate May into action.

The WASPI issue is not new though. In fact, it’s been brewing for decades.

The 1995 Conservative government’s Pension Act included plans to increase women’s state pension age to 65, which is the same as men’s. But the government did not contact the women affected until 2009 – 14 years later. At first the government planned to slowly phase the reforms in. But in 2011 the then chancellor George Osborne decided to speed up the process by several years.

As a result of these reforms, hundreds of thousands of women born in the 1950s (on or after 6 April 1951) have seen their retirement age increase by up to six years. And the women affected have had little or no time to make plans to finance the additional years without a pension. It has meant that women cannot claim their pension until 65 from November next year and until 66 from October 2020.

WASPI is campaigning for money to be set aside to financially support all women affected by the law change. And the petition specifically says that:

You can read the Department for Work and Pensions full response to the WASPI issues here. It said:

The government took necessary action in response to rapid rises in longevity by increasing men and women’s SPa [state pension age] in the Pensions Act 2011… Failing to act… would have been irresponsible and would have placed an unfair fiscal burden on the working population.

So far, parliamentary attempts to solve the problem have failed. There have been five previous debates on WASPI’s campaign, and none of them have resulted in the government meeting the group’s demands. But, with the DUP looking likely to vote against the Tories, the WASPI women may be getting closer to a victory.

And after a defeat in parliament about Universal Credit, and the ongoing furore over Brexit negotiations, the WASPI issue could bring a sharp sting in the tail for our embattled Prime Minister. May could very soon be toast.