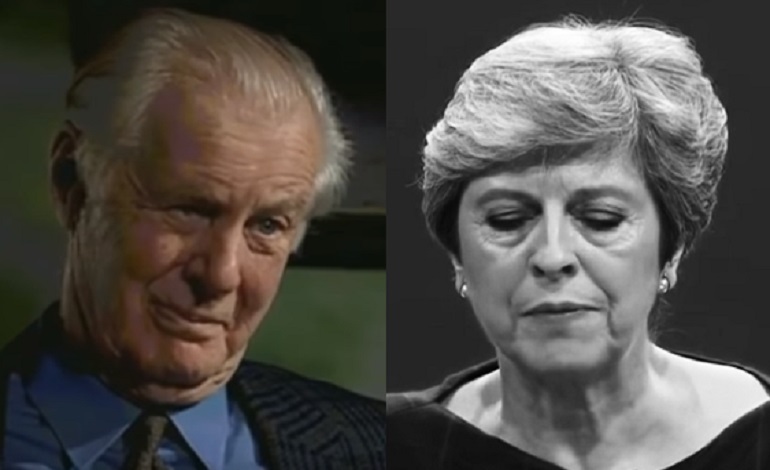 The Conservative government is currently embroiled in a so-called ‘dirty dossier‘ scandal. It involves alleged ‘sexually inappropriate behaviour’ by 36 Tory MPs. But a 50-second excerpt from a 1995 BBC interview with a former Conservative whip shows there’s nothing surprising about this.

Various media outlets have been running a story regarding Theresa May’s government and a list of serving Tory MPs. As The Mirror reported:

Tory staffers have compiled a list naming 36 of the party’s Cabinet ministers and MPs of inappropriate sexual behaviour… The spreadsheet… was compiled by current and former aides.

As The Times noted [paywall], the dossier contains allegations against “15 current ministers and more than 20 backbench Conservative MPs over the past five years”.

There have also been allegations that May receives “updates” about the “sexual antics” of her MPs, something Downing Street has denied. And as The Guardian reported, May’s former communications chief Katie Perrior told BBC Breakfast that the kind of information contained in the ‘dirty dossier’ was used by Tory whips against MPs. She said:

The information is held by the whips, because they use it to make sure that MPs know that other people within the party know exactly what they’ve been up to, and that behaviour either is not acceptable, or it will be used against them – you will vote in a certain way or we will tell your wife exactly what you’ve been up to.

But Perrior’s allegations are nothing new.

The late Tim Fortescue was a Conservative Party whip in Edward Heath’s government. And in the 1995 BBC documentary Westminster’s Secret Service, he said [0:08] Tory MPs would come to him if they were “in a jam”. For example:

And he said [0:30] the whips would try and help because they:

Would store up brownie points… If we could get a chap out of trouble then he’ll… do as we ask forever more.

As The Spectator reported at the time of the documentary, Tory whips:

enter details about the private lives of Tory MPs in what they call the Black Book or the Dirt Book, which is kept locked in the Chief Whip’s safe at No 12. ‘The Dirt Book is just a little book where you write down various things you know or hear about people that may or may not be true,’ says Lord Whitelaw. ‘I think you could make a very good guess what sorts of things it contains.’

Oh, scandalous stories. When you are trying to persuade a member to vote the way he didn’t want to vote on a controversial issue – which is part of your job – it is possible to suggest that perhaps it would not be in his interest if people knew something or other – very mildly.

It’s not just the Tories. We have a systemic problem.

The Canary approached the Conservative Party for comment on the video, and about the current allegations regarding serving MPs. It had not responded at the time of publication.

There has been a media storm surrounding the latest allegations against the Conservative Party. But a brief look through the archives shows that rampant misogyny and sexual abuse in parliament is nothing new. And neither is a political party using the appalling behaviour of its MPs to its advantage.

But as ethnographer Lisa Mckenzie says, when “misogyny is institutional”, from Universal Credit to immigration detention centres like Yarl’s Wood, parliament is the tip of a disgraceful iceberg. The problems currently being debated are systemic. And only a system change will solve them.