Yarl's Wood has been protected by the government for too long. It's time to shut it down [OPINION] - The Canary 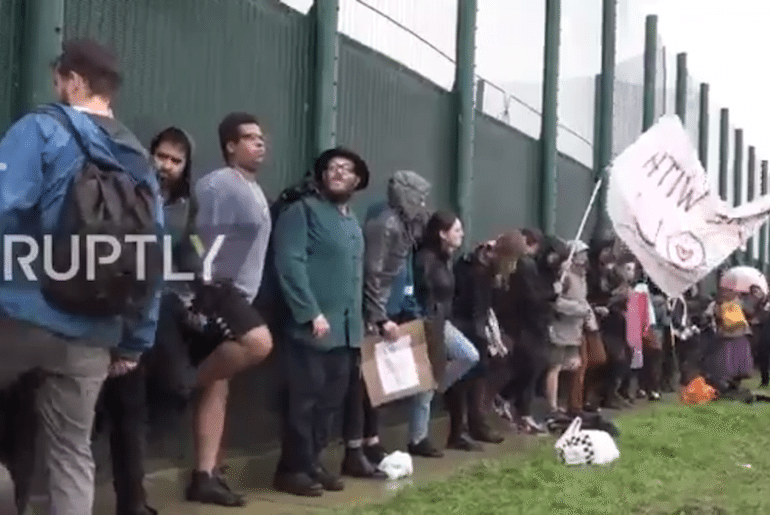 Hundreds of protestors gathered outside Yarl’s Wood detention facility on 10 September to demand its closure. But the events at Yarl’s Wood that have been exposed over the last year warrant more than just its closure. We should end detention altogether.

They call it “Notorious Yarl’s Wood”.

In 2015, scandal hit the Bedfordshire detention centre, covered up by four walls and iron fences but uncovered by a series of investigations. In March 2015, Channel 4 News took footage inside the centre exposing the abusive treatment of Serco-employed guards against detainees, referring to them as “animals”, “beasties” and “bitches”, while threatening to ‘beat them up’. The exposé also revealed extremely poor healthcare facilities as well as a culture of self-harm.

In June of the same year, a dossier of complaints was compiled by Women Against Rape and the Black Women’s Rape Action Project. Yet six alleged incidents of sexual abuse, over a three-year period, were only investigated one year later. The Home Office refused to reveal the outcome of those investigations and Serco has outright denied them, saying no cases of sexual abuse had occurred over the period of concern; although 28 employees have been dismissed since 2007 for inappropriate behaviour.

Yarl’s Wood is an £8.8m per year contract for Serco, but its performance has been found wanting in respect of professional standards and general decency. Yet it still enjoys the cloak of secrecy the government provides for it.

The national demonstration on Saturday 10 September called to #ShutDownYarlsWood. This was the ninth protest organised by Movement for Justice (MfJ), a civil society network that has been demonstrating since 1995 to end detention.

Hundreds turned up to encircle the camp, banging on pans and roaring through megaphones to demand the closure of the women’s detention centre.

The protests don’t ease conditions inside the centre, but they are welcomed by detainees. In fact, MfJ says it empowers them.

Karen Doyle, an organiser of the demonstration, told The Guardian:

It has been the women’s determination to speak the truth about sexual abuse and harassment that has seen the secretive world of abuse behind the walls of Yarl’s Wood exposed,

This is an issue for anyone who cares about women’s rights, human rights, justice and equality. The UK’s commitment to human rights is a lie as long as places like Yarl’s Wood exist.

While supporters made their voices heard outside, those inside protested the only way they could. A testimony from inside the detention centre, as published by Detained Voices, said the women inside were on hunger strike while protestors gathered on the outside:

Why are they frightened if they think they have nothing to hide? Why are they panicking like that?

There are so many officers, some of them are between the units, some are in the corridors, monitors and officers to keep an eye that you don’t even shout and you don’t even do anything. They have never done this before.

The allegations of abuse have been supplemented with worrying reports – of male guards videoing female detainees showering, watching them go to the toilet, and being present during their strip searches when they are on suicide watch.

Suicide is a major concern at the detention facility. According to a National Audit Office (NAO) report, one in five detainees attempts suicide in the centre. Many of them have faced great trauma, taking perilous journeys to flee from persecution or turmoil. They are at their most vulnerable, placed in a facility where staff are not trained to deal with complicated needs. NAO found that staff training on mental health needs at the facility is less than adequate. While training is now being provided, it is still not being given to all staff.

Immigration detention is an unfit solution for a complicated issue. It’s an attempt to address a perceived ‘problem’ – immigration numbers – rather than addressing real people and the problems that lead them to migrate. And it views the ‘problem’ as separate from any human element at all.

Immigrants are treated like criminals – detained, handcuffed on external visits, dealt with arbitrarily, punitively, and in a degrading manner. The holding of people for over a year is not uncommon, although it is illegal according to various high court judgments. The UK is one of the few countries in the world that allows indefinite detention until a decision has been made. Even a crime warrants a defined length of sentence, so why should someone seeking refuge in the UK be expected to live in a ‘prison’, their life held in limbo because they thought they were seeking something better for themselves?

There are ten detention centres across the UK, and seven are run by private companies. Complaints are not unique to Yarl’s Wood. The number of suicides, suicide attempts, and self-harm cases is of real concern across all the detention centres.

They are also expensive to run. It can cost £70,000/per person per year to hold someone in detention. A cost which is futile, as many people are released back into the community due to successful claims or to wait for the result of their claims.

The answer is simple: votes. The public perception of immigration in the UK is antagonistic. Read any articles on immigration, however sad or painful, and many comments will illuminate the worst in human behaviour – self-preservation. The fear of losing jobs, fear of ‘the other’. That fear makes us react to a problem and not to people, not to humans. The problem is seen as immigration, and detention is seen as the answer.

Immigration policy is therefore not likely to end detention any time soon. But the least our elected politicians can do is to address the deviants that are acting as its problem solvers. And that’s why Yarl’s Wood must close.

– Read Detained Voices and hear testimonies from those held in detention.

– Follow Movement for Justice and join their next demonstration.

– Tell Theresa May to stop covering up the abuse at Yarl’s Wood.

– Write to your MP and demand for Yarl’s Wood to be shut down.

– Read more articles on immigration in The Canary.