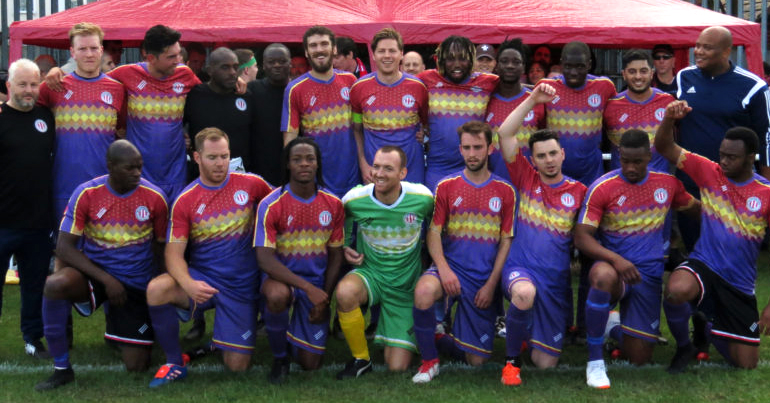 A new football team in London has received orders for 20 times as many shirts as it had available. And the team hadn’t yet played its first competitive game.

Clapton Community Football Club (CFC) launched its new away kit on 3 August. It expected to sell 250 throughout the season. But on 30 August, the club stopped pre-orders after more than 5,000 had been placed. Many of those orders were from Spain.

Clapton CFC was set up in February after fans and members split from ailing Clapton FC. A conscious effort was made to build the new club on collective decision-making. And this process led members to approve an away kit inspired by the International Brigades.

I really wanted to make something that marked the importance of the sacrifice of those who fought against fascism. We have always been known as fans who do not accept racism, sexism and homophobia, so it made total sense. We didn’t expect our tiny club to be noticed by Spanish football fans but we’re delighted nonetheless.

The kit features the three-pointed star symbol of the International Brigades. The shirt has “No Pasaran” printed across its back. Anti-fascist forces in Spain used the phrase, which means “They shall not pass”. And a three arrows symbol popular with anti-fascists appears on the right breast of the shirt.

Football has a troubled relationship with racism, sexism and homophobia. But Clapton CFC has challenged this, starting with its kit. Writing in the Guardian about the kit’s manufacturer, three members wrote:

They produce kits from materials made by fairly paid workers for grassroots football clubs that are principled in fighting racism, fascism and inequality.