I hate football, but there are chilling reasons why I want England to do well in the World Cup - Canary 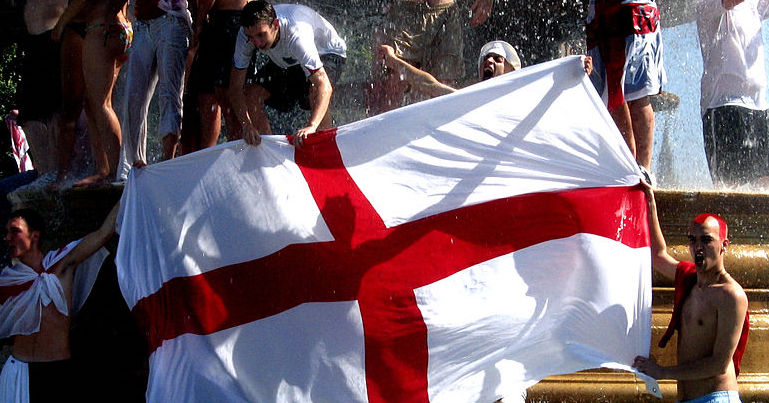 It’s pretty much impossible to ignore the World Cup – I hate football, but even I know that England are doing well. As they head through to the next match, I really want them to win. But this has nothing to do with the game. I don’t give a shit about Harry Kane or have the slightest shred of flag-waving patriotism. It’s because there’s a chilling link between domestic violence and the World Cup.

If England win, fewer women will get beaten up tonight. This is a tragic fact.

This statistic comes from a study carried out by Lancaster University in 2013. This tracked reported domestic violence across World Cup tournaments in 2002, 2006, and 2010. The spike was established by comparing tournament days when the team weren’t playing. The same study also showed that even when England win or draw, domestic violence rises by 26%.

Sadly, in the 2018 World Cup, domestic violence is already rising. According to Hull Live, so far:

Humberside Police have dealt with 428 domestic violence related incidents, a huge six per cent rise on the ten days before the tournament started.

Can we really hear these figures and still call football ‘the beautiful game’?

One is too many

A 2017 report from the Office for National Statistics found that 1.2 million women and 713,000 men had experienced domestic violence over the course of a year in the UK. And 70% of those who died in “domestic homicides” over a three-year period were women.

These statistics are already tragic, so even one more act of violence as a result of the World Cup is one too many.

But these figures may be the tip of the iceberg, because as Refinery29 reported:

Domestic abuse comes in multiple forms – from anger and physical violence to financial control and emotional abuse – it’s difficult to record and many victims don’t report it at all.

At least awareness is on the up. Domestic violence charity Women’s Aid is running a campaign called Football United Against Domestic Violence which works with:

national footballing bodies, sports media, football clubs, the police, players and fans to send a clear message that domestic violence is always unacceptable. Together we aim to call out sexist behaviour that can underpin violence towards women and girls.

Support is also growing – including from several police forces around the UK – for the Give Domestic Abuse the Red Card campaign, which:

supports potential victims and warn[s] potential abusers of the consequences of their behaviour.

Research shows there is an increase in #domesticabuse when @England loses or wins a World Cup game, and increases with every tournament. Give domestic abuse the red card during @FIFAWorldCup #ENGPAN #AbuseNoExcuse https://t.co/RyWbZ8BdCr pic.twitter.com/GNOBmXJSXf

The World Cup… is often associated with an increase in incidents of domestic abuse because of factors such as increased alcohol consumption and an increase in tension.

However, while alcohol and tension play a part, there are also deeper issues. As chief executive of Women’s Aid Katie Ghose explained:

But football ‘culture’ and its celebration of ‘laddish’ behaviour can be deeply sexist and misogynistic. As Ghose said, “domestic abuse does not happen in a cultural vacuum”, but:

The sexist attitudes, chants and behaviour at football matches encourage an environment in which women are belittled and demeaned.

There’s another shadow hanging over any rise in violence during the World Cup. Because under this Conservative government, there are fewer places for women who experience domestic violence to go. Women’s Aid claims that the Conservative government’s plans to remove [pdf, p2] “refuges entirely from the welfare system” will put 4,000 women and children at further risk. It also has concerns that up to 39% of refuges (supporting survivors of domestic violence) will be threatened with closure.

The government has launched a consultation on domestic violence. But according to Sisters Uncut, this:

is a dangerous distraction from the austerity cuts that have decimated the domestic violence sector since 2010.

As the heat-wave continues, and England score goals in the next match, how many of that 26% will need to use shelters? If England lose, statistically even more women will be at risk. The Tories have broken this country with continued callous and cruel austerity measures. And time after time, it’s the most vulnerable who suffer the most.

We need to look deeper to question the quasi-religious role football plays in this country. But it’s also a country that is now broken by austerity. Although violence crosses class boundaries, there are well-established links between the rise of domestic violence in times of economic difficulty. So this Tory government has a role to play if abuse soars too, regardless of who wins or loses the next match.

Beyond its hideous excess of wealth, fame, and power, football – so I’m told – creates a sense of community and tradition. Rich or poor, the world of 2018 is an uncertain world. It seems to give people hope when there is little else to believe in. But we need to challenge the risk of violence that chases the World Cup.

I hate football. The flags, the chants, and the leers can fuck off. But I really do hope that England win.

– If you, or anyone you know, experience domestic violence call the National Domestic Violence Helpline – 0808 2000 247