In a country with food banks and hospital closures, it's getting harder to tolerate football's excesses [OPINION] - The Canary 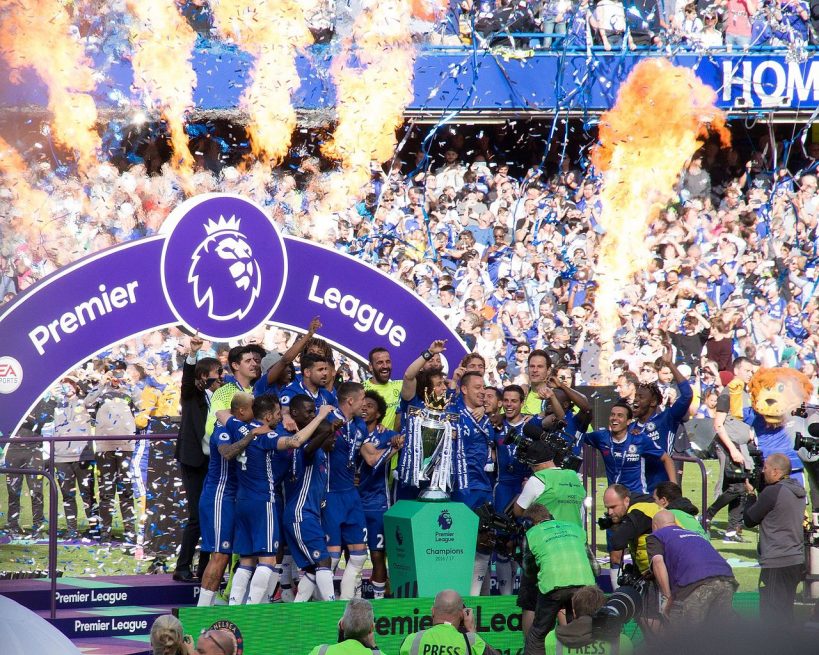 Born from the sweat of the industrial working class, among its many nicknames association football has long been known as ‘the people’s game’. The phrase conjures up quaint images; jumpers for goalposts, local pride and vast stands full of flat caps. Since the Victorians codified it, our national love of the sport has become perhaps our most binding cultural myth.

But does it deserve this kind of sentiment in the 21st Century? What is football today? And what connection does it hold with working people now?

For many citizens of austerity Britain, January is a fraught and frugal time. Festive excesses weigh heavily, while 2018 looms up like a mugger. Somehow the new year must be looked squarely, fearfully in the eye.

Wander through any town around 8am and you’ll see huddled workers waiting for buses in the rain. More than 20% of workers are in precarious, minimum wage employment. As Britain’s cost of living rises – food inflation reached its highest point in four years in November– many are wondering how they will get through the month.

Yet as Britons up and down the country face this grim reality, football indulges in a bi-annual carnival of extravagance. Since the 2002-3 season, the English Premier League has operated the ‘transfer window’ system, giving clubs only two sessions when they can sign or sell players. The summer window runs from June to August, while the winter period occupies the month of January.

For those on their way to work, newspaper back pages relate tales of unimaginable riches. The opening of the current window has already seen a world record: the sale of Brazilian Philippe Coutinho from Liverpool to Barcelona for £142m. Coming the other way, the reds of Merseyside signed Dutch defender Virgil van Dijk from Southampton for £75m.

Elsewhere, England international midfielder Ross Barkley joined Chelsea from Everton for an estimated total of £22m. In a sign of the unreality in which football operates, this figure is widely described as a “bargain”. Everton supporters, whose club is situated in a city with one of the highest rates of child poverty in the country, are incensed the fee was not doubled. Even the mayor of Liverpool, who should surely have more pressing priorities, has felt it necessary to comment publicly on Barkley’s sale. This is the power football has.

It is sobering to read that during the last completed transfer window, of summer 2017, the Premier League’s net spend came to £1.47bn. Consider the funding crises in our hospitals, schools and other public services. Much as we may love football and perceive it as separate from the wider economy, is there not a case for re-balance?

Haves and have nots?

According to the Disposable Income Data index, the typical Brit spent £342 on 2017’s Christmas presents. £303 of that spending was put on a credit card. 14% of us resorted to payday loans to make it through to the new year. With the average UK salary currently standing at £27,000 per annum, it will take Joe Public an average of four and a half months to clear their Christmas debt.

Ironically, as they do so, many will budget to include football support in their spending. Reportedly UK fans splurge an incredible £5bn annually following the game. Merchandise, travel, TV subscriptions – it all adds up.

For purists who savour the live experience, the Premier League is by far the most expensive in the world. Four London clubs; Arsenal, Tottenham, Chelsea and West Ham charge well over a thousand pounds for a season ticket. By contrast, German champions Bayern Munich, a bigger club than any of them, sell its season tickets for just €140, while Spanish giants Barcelona offer one for a similar price.

Does this suggest something about British society in comparison to Germany or Spain? What exactly is it about us that makes our game so pricey? And why is criticism of this not more vociferous?

Assisted by the huge sums they charge fans to watch, either in stadia or on TV, for those involved in the Premier League, transfer windows are a kind of festival. They add to the news cycle, providing streams of content and analysis. The climax of each window, known as ‘deadline day’, has even become a televised event in itself.

Marking the halfway point of the season, the January slot provides those at the top an opportunity to boost chances of glory. For those near the bottom, it offers a last, often desperate roll of the dice to avoid relegation, with the accompanying disaster of separation from the Premier League goldmine.

Such is the lure of the Premier League money-pit that most of its twenty clubs aim only to wallow in it. Few outside the ‘big six’ have realistic chances of success, although Leicester City confounded the bookies in 2016. That blip aside, along with Blackburn Rovers in 1995, only four clubs have won the title since its inception 26 years ago. But lack of true competition is of little concern. After all, last season’s bottom side, Sunderland, earned £99.9m simply for participating. This is modern football.

Of course, players cannot be blamed for these obscenities. Many come from working class backgrounds. Their careers are short and it is human nature to try to capitalise on your potential. Unlike banking or high finance, it at least makes sense for football’s billions to go to its frontline staff, rather than those in the boardrooms. Yet a country in which even hardworking people have to resort to food banks to feed their kids, while men are given millions to play football, clearly has some thinking to do. It is sad, considering its origins, but football has become one of the most grotesque 21st-century symbols of economic inequality.

It wasn’t always this way. Players and fans used to share a bond. They even mixed in pubs after games.

When young star Kevin Keegan signed for Liverpool in 1971, his basic wages amounted to £50 a week. This was in the old Football League Division One, where his salary roughly corresponded to the national average. Win and goal bonuses, along with merchandising contracts pushed his total earnings up, making Keegan well-off for the time, but nowhere near modern levels of opulence. Even in the 80s, typical footballer salaries hovered around £50,000 a year. Excellent money but not outrageous.

Yet something new was afoot in that decade. In Britain and America, Thatcher and Reagan sought to crush unions and encourage ‘wealth creators’. The discredited theory of trickle-down economics was promoted above all else. The rich should get as rich as possible and everyone would benefit, we were told. Of course, it was a poisonous lie. But the chairpeople of the big six football clubs absorbed this ethos with gusto.

The Premier League was formed in 1992 with a specific purpose. Top clubs broke away to keep the lion’s share of lucrative TV money. ITV was the original intended partners, before Rupert Murdoch’s BskyB muscled in. Sky tabled a bid of £304m over five years for exclusive live rights. And the league has been there ever since.

Over the next 25 years, aggressive marketing made the Premier League a global product, while foreign investment upped the ante. Stars from all over the world joined homegrown talent at the banquet. At the same time, match tickets and TV subscription prices rocketed way above the rate of inflation.

None of this happened by accident. It was designed and deliberate. Neoliberal business practice. Hyper-capitalism. Sport was long forgotten.

A supporter of what?

Most fans are drawn to football because of local attachment, or family influence. For some, team identity gives a sense of belonging. But the Premier League, for all its slickness and glamour, has changed that.

Clubs are no longer clubs in any meaningful sense. They are ruthless, profit-driven companies which sell a manufactured product. And fans are customers and consumers, nothing more.

But newspapers that relay hospital closures and rising poverty on front pages, with multi-million transfer deals on the back should provide serious food for thought. It may not seem obvious for football supporters, but there is a connection between the two.

Maybe the time has come to re-evaluate exactly what we are supporting.