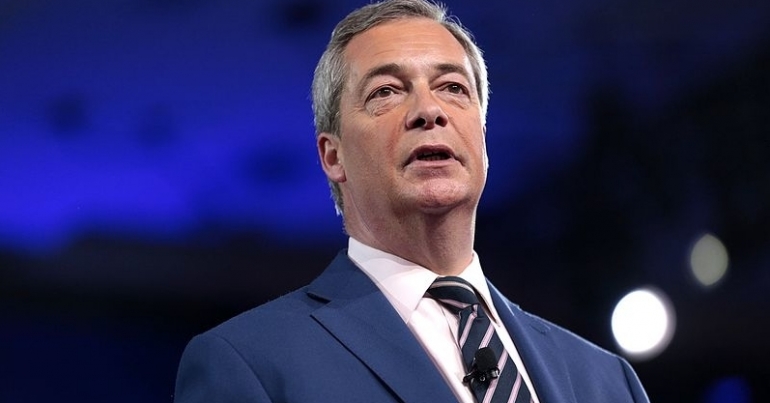 In the early hours of 24 June 2016, the pound tanked. Banks, businesses, and the housebuilding sector were hit hard. It also meant that holidaymakers would find their trips abroad becoming more costly. But a “never seen before” photo of ex-UKIP leader Nigel Farage, published by the New European, claims to show his strange reaction to the news. And it’s kicked up a storm online.

Why was Farage happy?

Yes, the former UKIP leader can be seen grinning, apparently at the fact the pound was rapidly falling. Why would this be something to celebrate? People on social media also expressed their confusion about the photo. As one Reddit user asked: “Seriously, why is he smiling?” Another user commented:

I seriously cannot believe that people are explaining this moment away, he can be happy that we have voted to leave the EU of course, but to smile because the pound is actually tanking is, irrespective of the circumstance, in very bad taste.

A recent Bloomberg investigation found that hedge funds made millions when the pound plummeted on the night of the Leave vote, as The Canary previously reported. The New European explains:

Bloomberg, the international financial news agency, suggested the former UKIP leader might have deliberately misled broadcasters into believing Remain had won the referendum, on the evening of the June 2016 vote. This, Bloomberg alleges, might have been with the intention of keeping the value of the pound artificially high until the true result later sent it plummeting.

The accusation, roundly denied by Farage, is that this gave hedge fund investors, some of whom are associated with him, a window of opportunity to bet against the value of sterling – bets that would pay off spectacularly once the actual result was known.

Farage hit back, telling the New European that the Bloomberg story was “conspiratorial nonsense”: 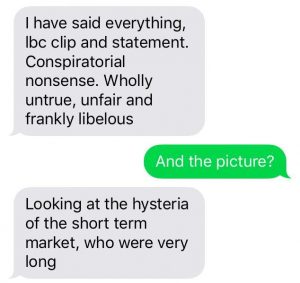 Farage has insisted he “had no financial interest in currency movements on the night of Brexit”. He told the Daily Mail:

There were many conflicting opinions and supposed polls that night. My frame of mind was negative on balance until [the] Sunderland [vote was announced].

Pro-Brexit journalist Isabel Oakeshott has claimed that she was with Farage that night and he was “downcast”:

This is such rubbish. I was with ⁦@Nigel_Farage⁩/ other Brexit campaigners that night. Till the early hours of the morning, he was sure Remain had won. He was very downcast indeed. https://t.co/aXi7l0ENYr

But some Twitter users argued that this photo (reportedly taken at 3:35am) suggests otherwise:

This can’t be right. The totally credible @IsabelOakeshott says she was with him all night and he was very glum.

Was this 5 minutes when you’d nipped to the toilet Isabel?

Either way, it’s easy to see why the photo is blowing up.