Hedge funds made millions off Brexit. And Nigel Farage's fast-and-loose approach to the truth may have helped. - Canary 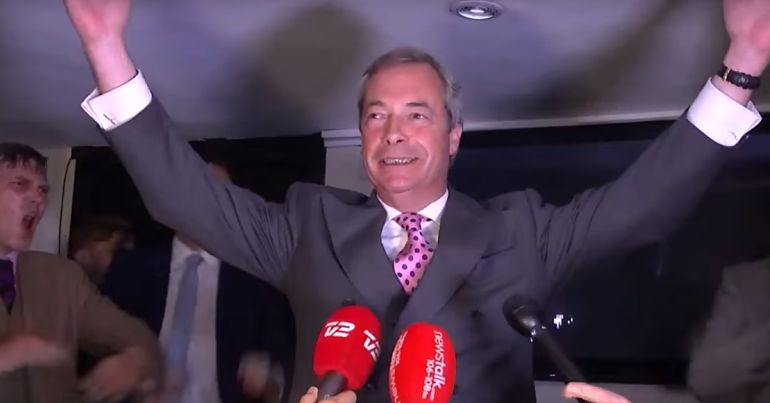 It has emerged that hedge funds made millions off the collapse of the pound on the night of the Brexit vote.

And surprise surprise, Brexit’s ‘friend of the people’ Nigel Farage was at the centre of it all.

Hedge funds hired some of Britain’s best known polling firms to help them make a profit on one of the biggest currency crashes in history, which happened immediately after the country voted to leave the EU.

Listen to this. The bit about knowing of polls before they become public and trading off them is vital. This is a fucking sewer. https://t.co/KTkbqVOFqT

Chellel went on to explain why the Brexit vote was so valuable:

Part of the reason they could make a profit on this trade was that the financial markets – like so many people – had got this wrong. They miscalculated the chances of a Leave vote.

That made it very cheap for hedge funds to trade the pound and increase their potential profits. But they needed to have an accurate gauge of public opinion and that’s where the polling firms came in.

Various hedge funds had hired polling companies, including YouGov, in order to predict the financial markets and pocket millions. No wonder they were laughing:

And BBC's 'Brexit: A Very British Coup' showed the profit that resulted overnight for a major Leave backer 📽️ pic.twitter.com/jb2MPYe8gp

As polls closed on 23 June 2016, Farage declared likely defeat for the Leave campaign in uncharacteristically gracious fashion. But an investigation by Bloomberg is accusing him of being fast and loose with the truth:

Remarkable investigation into how Brexit pollsters helped hedgefunds make millions out of the pound’s crash — and major questions over Farage’s role, who twice told the world that Leave had likely lost when he had info suggesting otherwise. https://t.co/LEfPWMMTO4 pic.twitter.com/MqmRLC9H02

Bloomberg also gets Farage on the record. But sums it up like this: "He twice told the world on election night that Leave had likely lost, when he had information suggesting his side had actually won." https://t.co/7UirtiP0Zh

And key Brexiteers benefitted hugely from the timeline of events:

A Bloomberg exclusive reports that Nigel Farage may have had information suggesting Leave had won before he conceded defeat to the Press Association.

They report that Leave donor, Crispin Odey, and others benefitted financially as a result – spread the word! pic.twitter.com/fMsOoVfpFo

In summary, @bloomberg describes the referendum as a financial heist. The biggest insider trading job in history when pollsters colluded with hedge funds to create a fake bubble that was burst by a fake concession ..delivered by friend of the people, @Nigel_Farage. pic.twitter.com/fCwjDpx6LW

Farage claims that Sky News “over-egged” his comments and rejected the idea that his admittance of defeat was an aim to influence financial markets.

Survation Ltd. has established itself as a leading opinion poll and research provider, including in respect of referendums and other elections where innovative methodologies are required. We work regularly for a wide variety of newspapers, private clients and political parties. Survation Ltd. does not comment on any confidential client work

Writing in the Guardian just days before the referendum, Paul Mason argued:

Take a look at the people leading the Brexit movement. Nigel Farage, Neil Hamilton, Boris Johnson, Michael Gove. They have fought all their lives for one objective: to give more power to employers and less to workers. Many leading Brexiters are on record as wanting to privatise the NHS. They revelled in the destruction of the working-class communities and cultures capable of staging real revolt. Sir James Dyson moved his factory to Malaysia, so much did he love the British workforce. They talk about defying the “elite”. But they are the elite.

So people shouldn’t really be shocked. Because friends help each other out:

It was clear at the time that Farage's referendum night words were very premature. The people who benefitted from them were his chums – the hedge fund managers – and they made billions out of Britain's misfortune. #BrexitPirates https://t.co/1E5jNI837I

Others are speculating as to whether there was more in it for Farage then just doing his pals a favour:

Hard to imagine @Nigel_Farage did this for free… is there more to come on this extraordinary story in which a bunch of hedge funds made hundreds of millions from Brexit? https://t.co/dD9GhvKdjS

Either way, a certain group of people are benefiting from Brexit:

• Johnson backing Leave side to improve his career prospects.

• Redwood advising investors to pull money out of UK.

Will non-wealthy Brexiters ever accept they’ve been screwed over? (no) pic.twitter.com/iup1mslhQz

Farage and his cronies campaigned for Brexit through appealing to real issues affecting normal people, such as NHS funding.