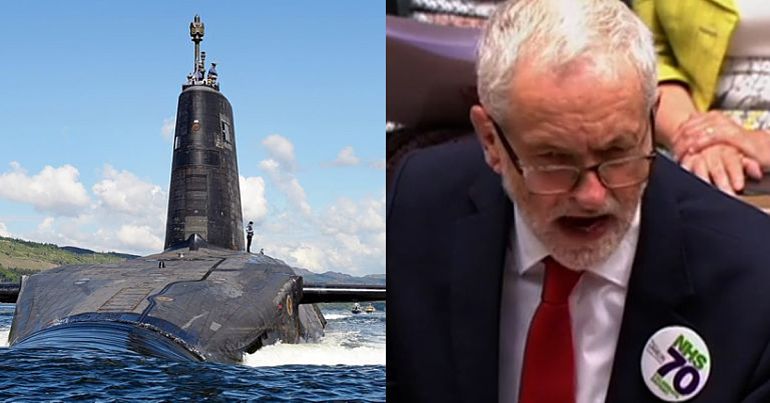 Jeremy Corbyn was elected as leader of the Labour Party to oppose the Conservatives’ relentless commitment to austerity. But until Labour changes its position on Trident, its opposition will always seem disingenuous.

On 27 June, for the second time in a week, Theresa May failed to confirm that the UK will remain a ‘tier 1’ military power. The term refers to “nations that have the full range of military capabilities, including nuclear arms”.

Very worrying that Prime Minister yet again refuses to confirm that she wants the UK to stay as a Tier 1 military power. I have been clear that this is a category that Labour wants us to be in https://t.co/UiE3miLviL

And she boasted on The Andrew Marr Show that Labour has consistently spent more than 2% of Britain’s GDP on defence:

But despite her confidence, people aren’t convinced that this is the stance Labour should be taking:

This is terrible from a moral standpoint. You won't even win any votes with this rubbish so why are we doing it?

And they would rather the money is spent elsewhere:

I'd much rather the money we currently spend on defence was spent on stuff like housing, health, education, transport, etc. We don't actually "need" a Tier 1 military, whereas people literally need homes and healthcare.

Others found the topsy-turvy situation baffling:

who would have thought it vote conservative get nuclear disarmament; Corbynite defence policy from @theresa_may

The ego of the British establishment

This seems a hell of a lot for something that SNP MP Mhairi Black branded as serving “no other purpose than to satisfy the ego of the British establishment”:

It represents a country looking back, glossy-eyed at its past status:

UK military spending is highest in Europe. Why? 'We' used to have an empire, now we don't our rulers want to continue to be players on the world stage by hitching us to America. This is great for them, but we get no benefit from it. Slash military budget = Rebuild welfare state

Instead, the Labour Party should be looking to the future, attempting to address the colossal damage of nearly a decade of austerity:

Corbyn vs the Labour establishment

Labour’s commitment to Trident seems even more ridiculous given Jeremy Corbyn’s position on it. He has admitted he would never hit the gleaming red button. In fact, during the renewal debate, Corbyn stated:

It is now time to step up to the plate and move rapidly towards disarmament.

Therefore, Labour’s position reeks of a lack of sincerity:

This is a terrible position that will only cost Labour votes. No-one on the Right will believe it, while those of us on the Left find it really worrying.

Corbyn became leader with a mandate to impart radical change, to leave the dull centrist policies of the past behind. But Labour backing Trident is achieving the opposite effect:

So much for any illusion that you're remotely anti-war. Militarists and social chauvinists, desperately clawing at whatever you can to retain Britain as a leading imperialist power.

Labour cannot be anti-austerity and pro-Trident. The party must change its stance. Otherwise, it risks confusing voters and appeasing cruel Tory policies.

At the moment, Trident is acting as a deterrent against supporting the Labour Party.