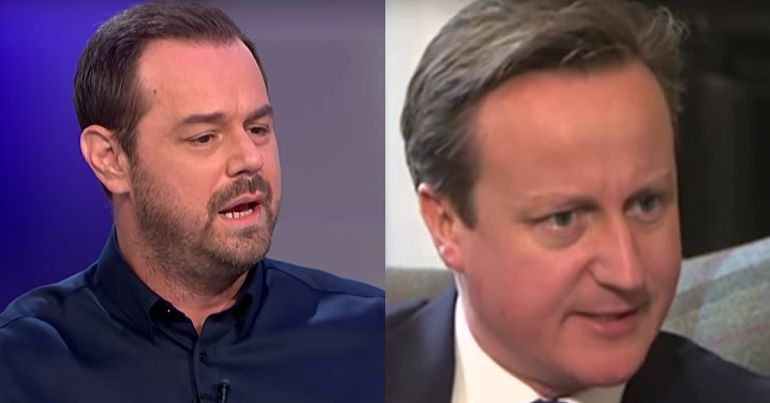 On 28 June, England needed a hero. The football team had lost to Belgium, and Brexit negotiations were crashing. But cometh the hour, cometh Eastenders‘ Danny Dyer.

With a slightly bemused Jeremy Corbyn looking on, Dyer labelled Brexit a “mad riddle” before calling out Cameron’s role in creating the situation:

So what’s happened to that twat David Cameron who called it on? Let’s be fair … how comes he can scuttle off? He called all this on… he’s in Europe, in Nice with his trotters up … he should be held [to] account for it.

“Brexit? No one knows what it’s about where is that TWAT David Cameron?? He’s in Nice with his trotters up…. TWAT!!!!” Danny Dyer pic.twitter.com/EEbSU08DML

Superb. Danny Dyer slams Brexit & asks how come “twat” Cameron can “scuttle off” to France and relax “with his trotters up”.
👏😂 https://t.co/JPoUoKUePe

The second TWAT from Danny Dyer is everything pic.twitter.com/HSZ9gpakGA@piersmorgan @susannareid100

Yet, despite the bizarre situation:

Imagine if this time three years ago someone had told you that prime time ITV on 28 June 2018 would be Jeremy Corbyn MP sitting next to Pamela Anderson giving his analysis of the England football game, with Danny Dyer shouting that David Cameron is a "twat". #GEB

…the consensus was that Dyer actually spoke a lot of sense:

Danny Dyer saying "Brexit is this mad riddle, no one knows what it is" was actually some of the most astute political analysis I've heard in ages, until he bettered it with "What happened to that twat David Cameron?" pic.twitter.com/s4zH5awq0r

More astute political analysis than you get from most of the media in just 37 seconds pic.twitter.com/7AHQBnjhtP

And he completed the holy trinity:

But Dyer does make an important point. Cameron called the Brexit referendum because he wanted to quiet dissenting voices within his own party and solidify his position at the top. And when it all went tits up, he scuttled off and put his “trotters up”:

2 years ago when he resigned lobby journalists discussed David Cameron's 'legacy'. The most obsequious spinners even tried to defend him

This idea that there’s one rule for the creators of Brexit and another for the general public is not just limited to Cameron. Tory Brexiteer Jacob Rees-Mogg’s investment firm has been accused of setting up a fund in Ireland while warning clients about the dangers of a hard Brexit. And Nigel Farage is facing allegations he used insider polling knowledge to influence financial markets to make hedge funds millions, although he strongly denies the claims.

All in all, it was a rare moment of perfect synchronicity:

And some now say Dyer speaks for Britain:

Genuinely had no idea who Danny Dyer was before today, and now I know he speaks for Britain.

Brexit has never been summarised better.

Just don’t let him loose before the watershed.