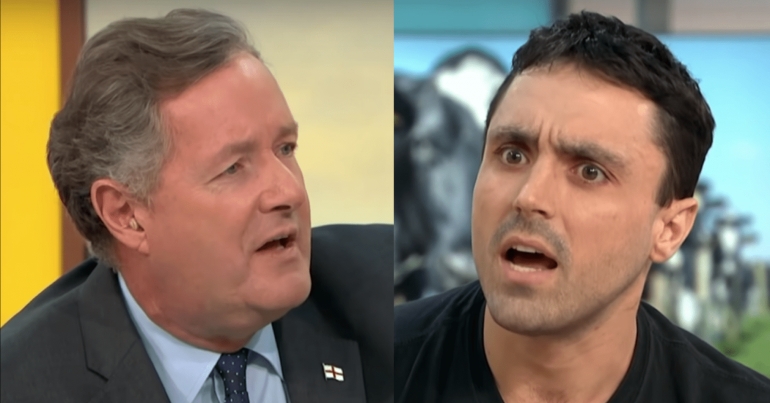 Joey Carbstrong is a veganism campaigner, known for his street debates with members of the public. He has also appeared on ITV’s This Morning, where Phillip Schofield grilled the activist over his opposition to dairy farming.

He appeared on national television again on 27 June to debate the dairy issue, this time on ITV’s Good Morning Britain. And it ended up getting pretty heated between Piers Morgan and Carbstrong.

Carbstrong points out that spent dairy cows will end up in slaughterhouses. But Morgan took issue with this ‘milk is murder’ line of argument, as well as the vegan movement in general. He said:

A lot of people might be tempted to take up a more vegan based diet. But they hate this kind of ‘vegan terrorism’ that’s going on… [where] milk is murder. That’s such a stupid thing to say.

Take the vegans out of the picture. It’s about the animals… To kill animals for a product we don’t need is cruel.

So, in September 2011, you were arrested when police found a loaded, sawn-off pump-action rifle.

This is no way to have a debate on dairy. This is a character attack…

Just because I did something wrong in the past doesn’t mean I can’t do something right now. How does that justify your abuse of dairy cows so you can have milk in your coffee?

During this debate, Morgan disapproved of vegans using inflammatory language, like ‘milk is murder’, but then compared vegans to terrorists. Morgan said, of course, he is against animal cruelty. But rather than taking a hard look at the ethical issues associated with dairy production, he resorted to personal attacks.

Regardless of Carbstrong’s past, Morgan showed that he didn’t have a leg to stand on.

– Read more articles from The Canary on veganism and animal welfare.