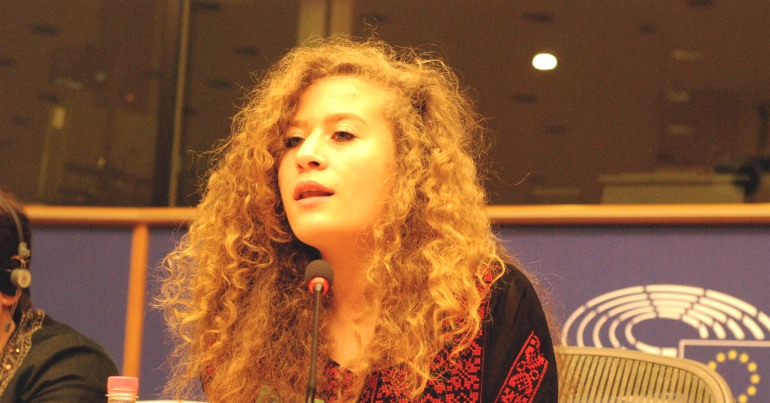 In an interview with French news outlet France 24, teen activist Ahed Tamimi discussed Palestinian resistance to Israeli occupation. She also shared the difficulties she faced in travelling abroad because of restrictions placed on her by Israeli authorities.

When asked if she had a message for Israeli teenagers, the seventeen-year-old appealed to them to “find their humanity”. She went on to say:

I’d like them to be aware as well about what’s happening, to differentiate good from evil. But they need to find their humanity… They shouldn’t become victims of occupation. These young Israelis have been fed with hatred against the Palestinian people, but they are victims.

#EXCLUSIVE – ???? "I ask young Israelis to find their humanity back, they have been fed with hatred": Activist Ahed #Tamimi speaks to @FRANCE24_En.
Watch the full interview ▶▶▶▶ https://t.co/kJckRoDQMy pic.twitter.com/3iiKKRRywk

Tamimi gained international recognition when she was arrested for slapping an Israeli soldier in December 2017. She was 16 at the time of her arrest and was released in July, after serving an eight-month sentence. Her case has shed light on the issue of Palestinian children arrested and detained by Israeli authorities. She said in the interview:

I think there is an issue with the media. We need to have more programmes that show the real situation of (young) Palestinian prisoners. Three hundred and fifty Palestinian children are currently being imprisoned. And their detention conditions were much harsher than mine because some of them were injured before they got arrested.

In the course of the interview, Tamimi was asked about the actions that led to her arrest. She described it as “a normal reaction against soldiers” occupying her home.

Absolutely not. To me, Hassan Nasrallah supports the Palestinian cause. He stands against the United States and Israel. So I agree with him on this particular point. But sometimes I can agree with someone on a given point but disagree with that same person on a different point.

Tamimi went on to say that resistance took many forms:

I call for people’s resistance of any kind… There are different manners to fight against this occupation. To each their own… I respect every type of resistance.

Tamimi shared plans to study international law as a way to serve the Palestinian cause. She completed her high school exams while still in prison and has now received offers of university scholarships abroad.

During the interview, Tamimi delivered a powerful message. And if young people listen, then there is a hope that the next generation can work together to make a difference.