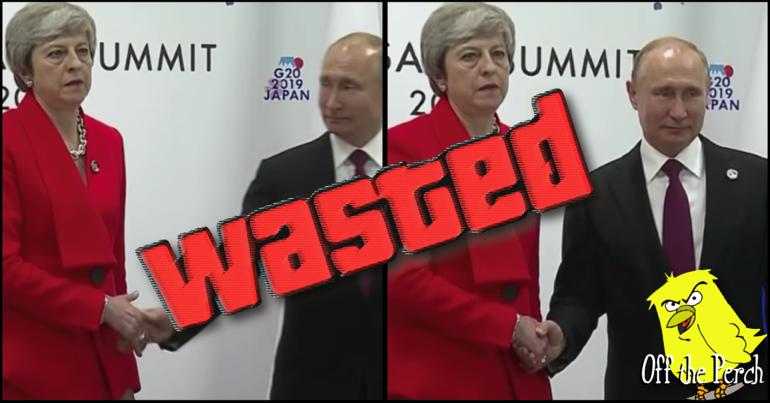 Our soon-to-be-ex-PM hasn’t achieved much of anything in the past three years. Nothing much beyond being the weakest leader we’ve had since accidentally electing a snowman in 1878, anyway.

It isn’t over until it’s over, however, and May might have completely changed her image with this BRUTAL DISREGARD FOR ETIQUETTE:

Or maybe she hasn’t, and she just gave Putin the least subservient version of what he wanted?

Respectfully, this is very unfortunate. Putin caused the murder of UK civilians with chemical weapons on British soil. He continues his active measures attack upon all liberal democracies around the world and PM May grants him a handshake and photo op. Terrible. https://t.co/3qT9OZ2tiu

One analyst said of the SLAYING:

What May did here was incredibly clever. You see, Putin wanted her to shake his hand, but he also wanted her to look like she enjoyed it. May denied him that pleasure. That’s why he’s so furious – furious to the point it actually looks like he’s smiling.

Another analyst offered a counter-point, pointing out:

She shook his fucking hand.

May’s record in office is allowing authoritarian hate-balloons like Donald Trump to lead her around like a show pony. As such, seeming slightly less willing is an improvement. It isn’t great, but it’s certainly less humiliating.

Maybe if Putin orders another hit on British soil she’ll take him off her Christmas card list?