Old NHS funding 'new' because 'I put a bow on it', claims Johnson - Canary 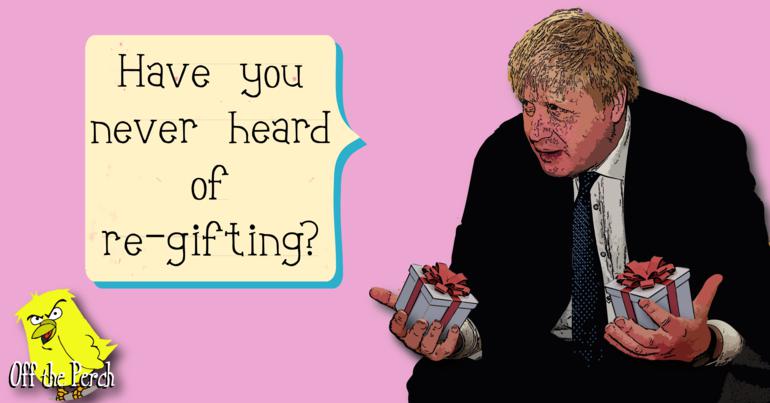 Boris Johnson recently promised some ‘new’ money for the NHS. It wasn’t enough to fix the problems his party inflicted has on it – not even close. At least the gesture was less insulting than when he claimed to have saved the Whaley Bridge dam by spending 5 minutes scooping out reservoir water with his hands.

Or it was for a short while anyway.

It now turns out this ‘new’ money is just ‘old’ money with a bow on it.

BBC reports extra £1bn for NHS capital spending this yr. There’s a catch: The £1bn is cash hospitals and other NHS trusts already have but have been forbidden to spend. They earned it last yr in incentive payments for cutting their costs [thread, 1/8ish]

I realise there’s some hullabaloo over this, but I can be clear about one thing – I had not previously given the NHS money, and now I have, in fact, handed over a great big wedge of wonga.

When it was pointed out that Johnson had asked the NHS to give him the money first, before he handed it back, he added:

And at that point, I put a bow on it – thus making it a gift. It’s really quite straightforward.

Loose with the truth

Johnson carried on talking for a bit, but none of it made sense, and none of it was true, so it isn’t worth reporting.

That would make a good heading on his tombstone, actually – right over the bit that reads: