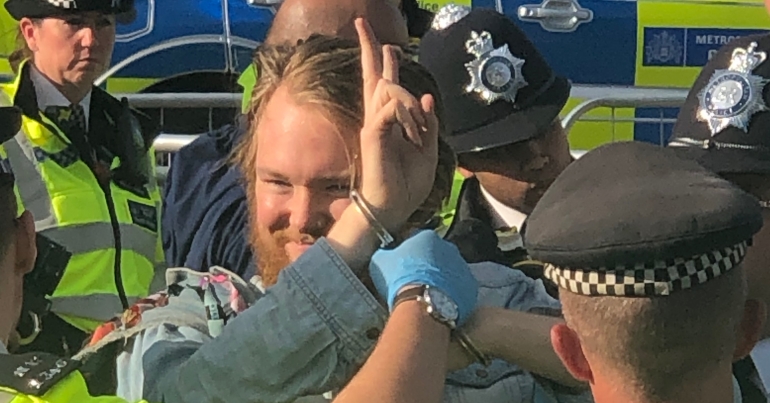 Defence Security and Equipment International (DSEI) – the world’s largest arms fair – is currently taking place in London. 116 people, including this author when not working as a journalist, have been arrested trying to stop it happening.

And one tweet shows exactly why so many of us are prepared to put our bodies in the way of this trade in death and destruction.

Guess the number of bullets

Leon Neal, a photographer for Getty Images, tweeted some pictures from the first day of the arms fair. He snapped one vile contribution from Calder Defence, which makes bullet cores. Its stall featured a jar of cores with a prize of a £50 M&S voucher for the lucky winner who could get nearest to guessing the number:

Scenes from day one of DSEI, the world’s largest arms fair. pic.twitter.com/snW20f8MiY

Yes, roll up, roll up. You can win prizes for counting bullet cores – everyone of which has the ability to kill, maim or injure people around the world. Seriously, it’s so sick, you couldn’t make it up.

The UK-wing of Israeli arms company Elbit also featured in the tweet. Amongst the weapons on display is a “guided advanced tactical rocket” and “precise and effective rockets and missiles”.

As The Canary previously reported, Elbit advertises its wares as “battle-proven”. A spokesperson for Disarm DSEI said this means “weapons have been tested on the bodies of Palestinians”.

Elbit manufactures several types of weapons that are considered controversial under the laws of war because of their inability to distinguish between combatants and non-combatants – a core tenet of international humanitarian law. These include weaponized white phosphorus, cluster bombs, and flechette projectiles.

The company also sells products around the world, including to countries with far-right governments and appalling human rights records. Meanwhile, in 2014:

it used its experience providing electronics to the West Bank and Gaza apartheid walls to win a contract with the US to develop surveillance towers on Arizona’s border with Mexico.

The way these weapons are displayed and the fact that bullet cores are used as a ‘fun’ guessing game tells you everything you need to know about the arms trade.

This vile fair ignores human suffering at the expense of profit. Making money is more important to this industry than the lives of Yemeni or Palestinian children.

It’s therefore down to all of us to say no to this trade in death and destruction and to take action to shut it down for good.