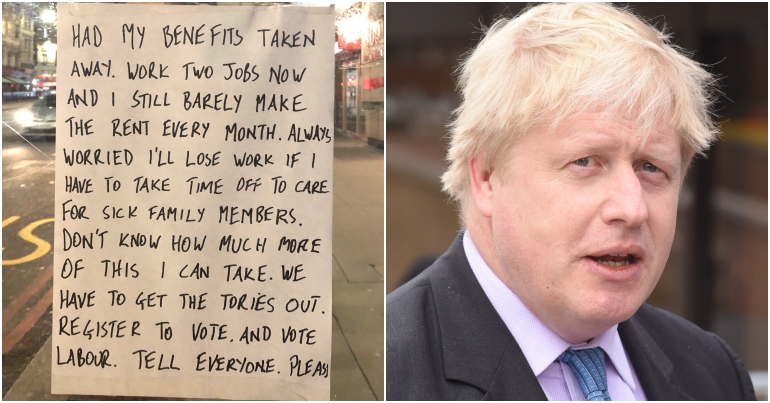 A handmade poster stuck up at a bus stop is going viral on social media. The poster shares a personal story about life under the Tories and implores people to “register to vote, and vote Labour”:

Found on a bus stop. What an amazing idea. Gonna go home and make some of my own about my own life and put some up round my area. Imagine if everyone starts doing this – every bus stop in the country plastered with 100 stories of how the Tories have screwed our lives. pic.twitter.com/IrZIAIXwnQ

The idea is now taking off. #ToryStory is trending on Twitter. It’s a genius idea. Because so many of us have heartbreaking tales of the impact of nearly ten years of Conservative-led governments. And while the Conservative Party might have big social media budgets for targeted advertising, this is something all of us can do to speak to ordinary people in our communities.

Twitter user @Prolapsarian, who shared the original poster, shared their own story:

I was so inspired by the sign I found yesterday that I made my own about my own life and put them up around my area. Everyone should do this. It only takes a few minutes! #ToryStory Tell your story or those of loved ones. We need the Tories out. pic.twitter.com/w1yVfHMCD8

People are sharing DIY posters telling heartbreaking stories about the impact of austerity. It's sparked others to share their own stories…

"Don't know how much more of this I can take. We have to get the Tories out."

As I cannot walk to a bus stop I'll share my #ToryStory here if that's OK. After an appalling PIP assement i was on the edge of suicide, I didn't go through with it only because I switched my phone on & heard the fear & tears in my parents voice mail messages. They knew.

how are you supposed to attempt to get better under 3 years of stress ?

Anyone who’s not part of the wealthy Conservative establishment has a #Tory Story – so here’s mine:

Having been diagnosed with complex PTSD and fibromyalgia, I used to get Disability Living Allowance. Two years ago, I was reassessed for Personal Independence Payments. I scored two points and lost my benefits. I could have appealed. But the assessment process had a massive impact on my mental health, and I knew I couldn’t sustain my job and the stress of the appeals process.

Meanwhile, no help is available on the NHS. Mental health services have been slashed, and like many people I fall in the middle. My PTSD is too complex for the six weeks of cognitive behaviour therapy that’s offered. But I’m not in crisis enough to get help from mental health teams. So I’m just expected to somehow muddle through.

My son is nearly 16 and I’m genuinely terrified about the world he is facing. The safety nets I had at his age are gone. Soon he’ll have to decide whether it’s worth getting into ridiculous amounts of debt to pay university tuition fees. Either way, unless something changes, he’s going to be facing low wages and massive rents. And that’s without thinking about what happens if he’s not fit and healthy.

I’m not saying parliamentary politics is the answer to all our problems. But we have a real opportunity to build a better future. So register to vote, and vote Labour. And if you can’t do it for yourself – do it for all our children.

Stories are powerful. And our stories are a power we all have. Tell them. This is DIY culture at its best. We don’t need expensive ads and media manipulation. We have paper, marker pens and tape, and we can reach people. Each and every one of us who the Tories have screwed over can get out there and tell these stories.

And it’s exactly campaigns like this that should have the Tories quaking. It’s something they can’t control, and it exposes the heartwrenching damage they have caused to people across the country.