When death dealers make ventilators, we know it's time to end the arms trade - The Canary 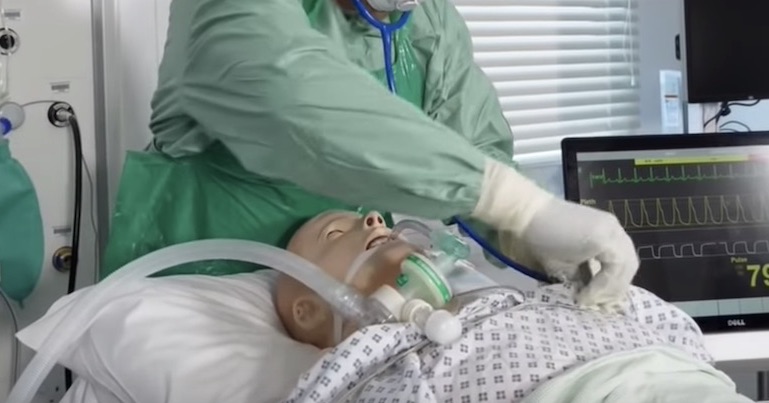 Peace activists might be relieved to hear that UK arms companies are teaming up to make much-needed ventilators. Some of the country’s biggest dealers in death – BAE Systems, Airbus, Thales, Meggitt, Rolls-Royce, GKN and Ultra Electronics – have joined a 12-company consortium called Ventilator Challenge UK.

Meanwhile, arms company Babcock is working with a medical equipment company to make thousands of ventilators. Babcock is now seemingly concerned with saving lives, rather than being complicit in taking lives. Babcock’s Jon Hall said:

When the opportunity arose for us to get involved in helping the NHS to save lives, we knew it was the right thing to do.

Hall obviously doesn’t see the irony in this statement.

Finally putting their skills to good use

For years, anti-militarists have been campaigning for arms industry engineers to switch their skills to something that’s actually useful.

Campaign Against the Arms Trade’s Andrew Smith told The Canary:

Right now, Saudi Arabian forces are using UK-made fighter jets, bombs and missiles to inflict a brutal humanitarian crisis on Yemen. The people making these deadly weapons include some of the most skilled engineers in the country. This shows how their skills can be used for something positive. It shouldn’t take a crisis for the government to invest in ventilators and critical care.

Looking forward, there must be a major overhaul of UK security strategy. There must be be a focus on the health and welfare of people, rather than spending billions on weapons and war.

Emma Wadsworth from anti-militarist group Stop Elbit agrees. She told The Canary that “now is a crucial time. We need to choose life over death, and public health over profit”. She continued:

The skilled engineers at arms companies could be making respirators or remotely controlled vehicles to decontaminate urban spaces (as are being used overseas). Going forward, they could diversify to produce search and rescue equipment for land, sea and air.

Despite the lockdown, weapon production continues

Unsurprisingly, arms companies aren’t mentioned in the government’s list of non-essential businesses that should close. Factories continue to produce weapons, despite the coronavirus crisis. BAE Systems has stated that many of its sites remain open to:

deliver critical capabilities to help governments and members of the armed forces and security services to protect national security at this challenging time.

Glasgow Catholic Worker‘s Richard Barnard is under no illusion that the arms industry is working for the good of the people. He told The Canary:

These arms companies are still open! They are making themselves ‘essential’ workers so that they can Covid-wash themselves, appearing to be the good guys when all the time they are continuing to make and ship deadly weapons. How many lives will they continue to destroy? If they were to stop making weapons and use their undoubted brains to build stuff that we actually need – and will need more of in the coming years with the impending ecological breakdown – then I would cheer them. But until they stop for good, do not trust them. We must keep trying to stop their evil trade.

“We should remember this in the future”

The arms industry’s switch to making ventilators shows what we knew all along: that it’s easy to change to other types of production. Anti-militarist campaigner and Canary writer Tom Anderson agrees:

We should remember this in the future. It’s completely possible for arms companies to change their production. The only reason they’re not doing it is that there’s masses of money to be made from killing people, and masses of money to be made from making weapons for states to use in their colonialist wars. The only reason they keep doing it is to make profit.

When the coronavirus crisis is over, we need to continue to hold the arms industry to account. As countries will be looking to boost their economies, it could be the arms companies which see a boost in contracts. We need to make the message clear: engineers should be using their skills to save lives, not take lives.