At this rate, Boris Johnson will end up all alone as the prime minister of nowhere - The Canary 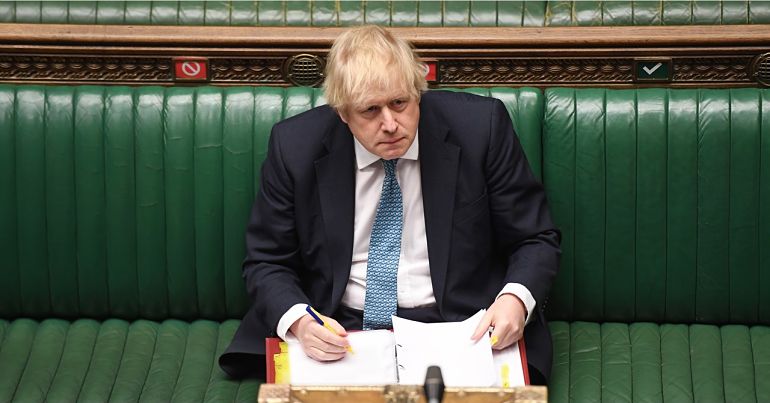 It’s fair to say that being PM isn’t the celebratory stroll to Brexit that Boris Johnson was expecting. No, it’s actually a real pain in the arse. It’s really hard work and everything’s going wrong all the time.

To use a sporting turn of phrase, as there’s no sport to use them on at the moment, Johnson was hoping for an easy home fixture, on comfortingly familiar territory. Instead, he’s having to play away (quiet at the back) at a ground he’d never even heard of, on a pitch full of gremlins.

Predictably, as he’s always been one for an easy ride, this is proving tough for Johnson to take. And now he finds that, when he needs them most, friends and allies are evaporating.

The coronavirus (Covid-19) pandemic is horrible, and we all wish it had never happened. But it’s here and it’s having some weird effects. Almost laser-like, it’s burning away the insulating outer layers of society and government. It seems like we can see the internal workings much more than usual. Among other things, we can see that most of what we thought we knew about who are the important people was wrong. Yeah we miss the footballers and the bands, but we can deal with that. The nurses, carers, cleaners, shop workers, transport staff, delivery people? Actually really fucking important.

We can see the cogs of government as they creak slowly round, not always in the right direction and rarely meshing correctly. We can watch in real time as a delivery of Personal Protective Equipment (PPE) gets delayed, then rescheduled, then arrives, then turns out to be useless.

And any notion of a ‘united kingdom’ is fragmenting before our eyes as governments in Scotland, Wales and the north of Ireland look at England and say: ‘Fuck that. Are you mad?’

Johnson’s Conservative and Unionist Party has long trumpeted the importance of the whole UK sticking together. Within the party, there’s a strand of thinking – which even Johnson has grabbed at – called ‘One Nation Conservatism’. As well as support for the union, this – in its most rose-tinted version – aims at a form of governance for all.

But again, the pandemic has stripped the veneer and shown us the reality. The BBC’s Emily Maitlis, of all people, gave voice to this fact by saying: “the disease is not a great leveller”. Far from somehow reducing the rampant inequality in the UK, the pandemic is feeding off it. Whether it’s the risk of serious ill health or coping with lockdown, coronavirus is easier to deal with if you’re well off. The government’s announcements that golf is back on while manufacturing workers should get back to work but avoid public transport are almost a celebration of inequality. A giant ‘fuck you’ to any sense of fair play.

In fact, this is so far removed from most conceptions of ‘British values’ that the bits of the UK that aren’t England are doing their own thing. The Guardian’s Martin Kettle observes that this isn’t just the product of recent events; and he suggests that it’s leaving Johnson as the effective leader of England only.

Johnson packed his cabinet with largely talent-free nonentities, distinguished only by their cultish mania for the ‘free market’. The only rational explanation for Dominic Raab is that he’s a mechanism for making Johnson appear competent. The even-less-sharp tool in the box as it were. The fact that recycled spiv Grant Shapps has been so prominent in recent weeks shows the total lack of quality in Johnson’s team.

But even among people who owe their political existence to Johnson’s misguided generosity, there are rumblings. Matt Hancock, who one suspects would do anything for a dog biscuit, has reportedly reached breaking point. Fed up with getting the blame for the health of the nation (which, as every Tory health secretary since 2012 knows, is really not their problem), Hancock has snapped. Like any self-respecting teenager trying to prove how mature they are, he apparently whined: “That’s not fair – give me a break” at Johnson. If Hancock, a minister lab-grown by scientists from only enthusiasm and loyalty, is stropping off, who will stick up for Johnson?

Nothing left but to spend more time with the family

Johnson is rapidly losing the UK. He’s at risk of losing large parts of England too, due to his reckless and overly-centralised approach. And he seems to be losing his cabinet colleagues. Bizarrely, he remains broadly popular. Although it could be that fewer people thought he was doing his job “very badly” in April, while he was in hospital hooked up to oxygen, because that was when he had a valid reason for not doing it at all. It could also just be that Brits love nothing more than a hopelessly mismatched underdog.

And that’s all Johnson is now. A pitiable figure, completely out of his depth, with increasingly few people still willing to listen to him. In the language of a thousand resignation letters, he should look to ‘spend more time with the family’. It would be nice for them and it would be good for all of us.