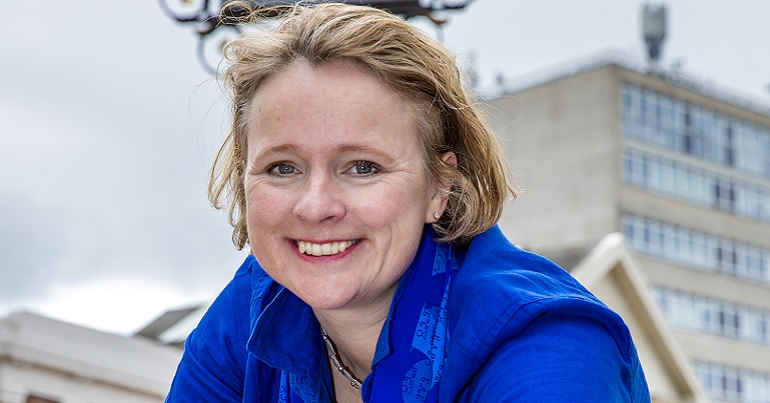 The Tory government’s children’s minister has been repeatedly accused of lying over claims she made that parents were spending free school meals (FSM) eGift cards during the coronavirus (Covid-19) pandemic.

The Tory children’s minister and FSM

Am speaking to all supermarkets on what more can be done to protect staff and make sure kids get food.

Her tweet left people angry. As author James Felton alluded to, Ford did not give any evidence to back up her claims. Because we should obviously trust a minister from a government led by a PM who perpetually lies:

Do you have evidence that this is widespread or are you – a children’s minister – undermining a scheme that stops kids from going hungry based on absolutely fuck all?

And Lisa gave a possible reason for Ford’s tweet:

Why would you tweet this? What is your intention other than to fuel unpleasantness and encourage contempt for those already struggling? And how many incidents have there really been?

But openDemocracy editor Caroline Molloy thinks she may know where Ford’s claims came from.

Buying Lego? What a criminal

Back in May, several media outlets reported the story of an Asda worker in Hull claiming people were trying to use FSM eGift cards on ‘Lego, Carling and bras’. “I got so much abuse from a customer… because she wanted to buy her son Lego”, the shop worker said. God forbid that this mum may have skipped meals herself to make sure her child was fed. Then, with the leftover voucher she wanted to treat him during lockdown. Of course, though, she’s poor – so clearly that wouldn’t be the case.

Edenred, which operates the FSM eGift card scheme, is clear about restrictions in its emails to parents / carers: 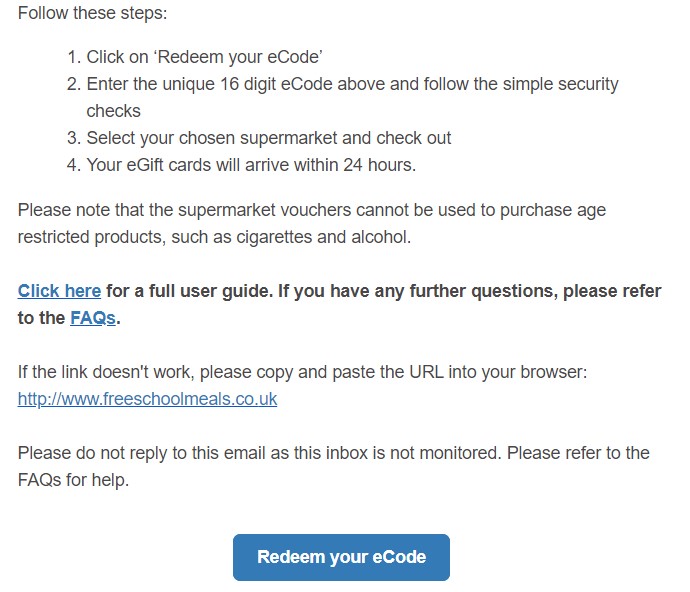 Yet SchoolsWeek claimed that restrictions didn’t exist. The problem being, clearly the people writing the articles have never actually claimed FSM.

Back in the real world

I get FSM for my stepson. So I know for a fact that you can’t use the eGift cards for age-restricted products in Sainsbury’s or Tesco; the latter’s tills ignore these when taking the voucher off at checkout. John Lewis (because so many parents with FSM shop there) is clear they can’t be used for fags or lottery. And back in April, the Grocer reported:

Supermarket vouchers were currently only blocked from use on age-restricted items, such as alcohol, cigarettes or lottery tickets.

But problems have littered the Edenred system. As Milly tweeted:

3 of our eVouchers haven't worked at the checkout. Had to use my own money. Many parents are having to use school phones as a call costs £21 to Edenred to get the issues resolved. No mention of that hey 🤔

I also had the same problem with vouchers not working. As the Guardian reported, so did other parents.

Moreover, Ford should address the fact that some FSM eGift cards are only redeemable in store. For parents who were shielding, this was a dangerous situation for them during lockdown. They could either go out and and get food despite the medical risk. Or they could protect their health but not get food. Also, the Observer reported that nearly a fifth of households with children did not have enough food to eat in the five weeks leading up to May. It also noted that hundreds of thousands were missing out on breakfasts. This is because school breakfast clubs had stopped.

The £15 a week FSM eGift card is based on a little over cost-price to the school caterers. It is not based on the retail price of the same food in a supermarket. Meanwhile, somewhat ironically, before she was children’s minister Ford voted to cut eligibility for FSM anyway. So, her faux-concern and ‘think of the children‘ self-righteousness doesn’t ring true.

I asked the Department for Education (DfE) about Ford’s claims. I wanted to know what evidence it had on the misuse of FSM eGift cards. Then, I also asked why she had not mentioned some supermarkets’ age-restricted constraints. A spokesperson told me:

We expect free school meal vouchers to be used on appropriate food and drink. The vast majority of families have been doing so and using this vital support to help feed their children while schools have been closed. We are speaking to supermarkets to ensure that they have the support they need to advise families using these vouchers.

Ford’s claims are in line with the ‘flat screen TV’ trope that was used against poor people and social security claimants in the last decade. That is, that people on benefits shouldn’t have flat screen TVs. A smear that ignores the fact that you couldn’t buy anything but flat screen TVs. Unless you think poor families should huddle round their gas fires, singing Chas and Dave songs while ‘ma’ peels the one potato they’ll all be sharing for dinner. As Brian neatly summed up:

Typical Tory MP. Born with a natural Thatcherite contempt for the working classes and the poor and needy. The likes of @vickyford are always looking to hurl smears at those they imagine are cheating the system, whilst ignoring wealthy tax avoiders and evaders https://t.co/1xfqnDG5gZ

This crass Tory demonising of poor people is par for the course. And it’s even crasser during the middle of a pandemic, when millions more people are now claiming social security and poor people have died at higher rates than the rich. Ford’s baseless and most likely isolated claims reek of classism. And as Raven pointed out:

You know what is really sad? The fact that these people have so little anyway that they have to have these vouchers in the first place.

But her noxious rhetoric also stinks of the possible upcoming blame game that will happen. Along with Boris Johnson’s care homes smear, it’s becoming clear that the blame for the almighty mess the Tories have created with their handling of the pandemic is going to be pushed onto the poorest in society. Nothing changes, hey?