Liz Truss says the UK should be ‘kinder’ to trans people. But her government’s actions don’t match this message - Canary 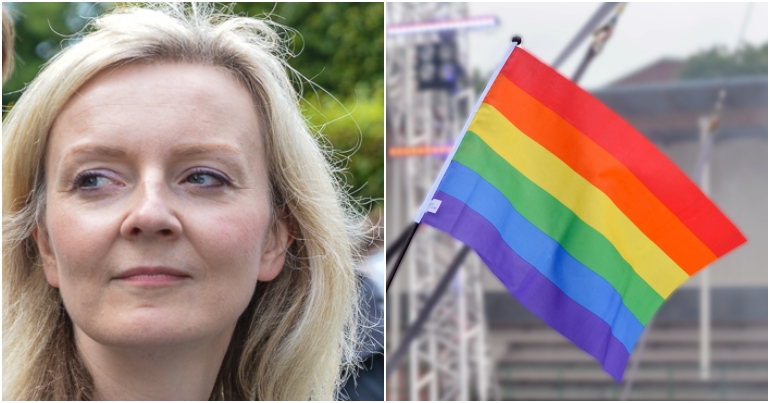 On 22 September, Liz Truss released a statement outlining the government’s response to the Gender Recognition Act consultation. In the statement, she openly admits that the experience of trans people in this country needs to be made “kinder and more straightforward”.

But the government’s actions don’t reflect this message. Because its opted to make very few changes to the “bureaucratic” and lengthy process of applying for a Gender Recognition Certificate (GRC). To be eligible for a GRC, you may have to pay your GP for a report indicating you have been diagnosed with gender dysphoria. And you must have lived as your preferred gender for two years. It can be a lengthy and demoralising process. But all Truss’s reforms have done is move the long and difficult application online.

No mention of non-binary people

Furthermore, nowhere in her statement does Truss acknowledge the non-binary community and their struggles. Non-binary individuals are not eligible for a GRC because the only genders legally recognised in the UK are male and female. This can be incredibly dehumanising for non-binary people. One person, who identifies as fluidflux, emphasised the importance of legal recognition for non-binary identities:

Legal recognition can improve the wellbeing of non-binary individuals. For me, progressing each day by consistently being forced to categorise myself as a gender I do not identify with weakens my mental heath, particularly my emotional state and my self-esteem… Being legally seen as non-binary, could prevent such issues and allow non-binary people to feel safe.

Right now, non-binary individuals have nowhere to turn to legitimise their gender. But they make up 0.4% of the population. And 65% of people who identify as non-binary aren’t even protected under the Equality Act 2010. It’s further evidence of how this Conservative government is cutting out non-binary people; making them fend for themselves in a transphobic society.

Non-binary identities haven’t just been left out of the government’s actions. They’re also rarely seen in the public debate on trans rights. In a controversial tweet, JK Rowling took issue with the phrase “people who menstruate” by saying:

there used to be a name for people like that. Someone help me out. Wumben? Wimpund? Woomud?’.

Many trans men and non-binary people who were assigned female at birth responded saying that they were people who have menstruated and they weren’t women. So the inclusive language was actually welcome. In JK Rowling’s response to these people, she insinuated that many young trans men who transition are acting foolishly and suggested that the growing number of trans men who feel the need to access Gender Identity Clinics is a cause for concern.

In her essay dated 10 June 2020, there isn’t a single mention of non-binary identities and their experiences. She does, however, find time to mention her fears that cis men will abuse access to a GRC in order to enter women-only spaces; although the idea that a cis man will spend £140 or more and live for two years as a woman in order to commit a crime seems ludicrous.

Truss also references these fears in her statement by stating that the Equality Act 2010 allows single-sex spaces to be limited to one biological sex. In this way, she appears to prioritise placating transphobic groups who accuse trans women of infiltrating women’s spaces over demonstrating empathy towards marginalised gender identities. This isn’t surprising given that, as recently as May 2020, Truss said:

adults should have the freedom to lead their lives as they see fit, but I think it’s very important that while people are still developing their decision-making capabilities that we protect them from making those irreversible decisions.

This suggests that children and teens are incapable of knowing they’re trans. It seems very similar to Thatcher’s Section 28 which banned discussion of homosexuality in schools in order to “protect” children. No medical help available to young trans people is irreversible, so Truss’s statement was entirely unfounded. Rather than supporting the trans community, it just seems like more transphobic rhetoric.

Truss’s statement on the Gender Recognition Act demonstrates how little the government is doing to improve the lives of trans people – and non-binary people in particular. The trans community and its allies need to continue to uplift all trans voices. We can prevent transphobia by being the loudest voice in this debate.