Why isn't your power station wearing a poppy? 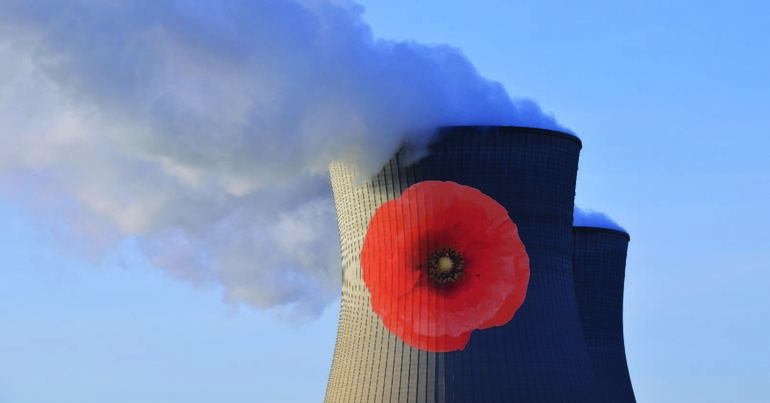 The numbers are finally in. We can report that Gross Domestic Respect (GDR) is up by 20% this quarter. The evidence is all around us that Britain’s last industry, Hugely Performative Patriotism, is thriving.

Now this veteran has recovered from last night’s fireworks, let’s have a look at some of the highlights of the 2020 poppy season so far.

The truth is Britain’s economy might soon be able to run on poppy power, but it doesn’t stop there.

You can now drive over them on your way to work:

Loving the new poppy crossing outside @PoppyFactory on Petersham Road! ♥️ It’s the first poppy crossing in the UK and has been installed by Richmond Council as part of the programme to mark this year’s Armistice Day. #Richmond #LoveLocal pic.twitter.com/CyHkqY3kMj

Because nothing says ALL CAPS RESPECT THE FALLEN like driving buses over poppies 150 times a day:

This #RoadRemembrance in Richmond should give pedestrians pause for reflection as they consider the tragedy of a lost generation pulverised by the gears of war much like Poppies being poignantly mashed under the wheels of a number 23 bus. 7/10 pic.twitter.com/gxWpoo6WXB

Someone somewhere in our Completely Normal Country went all in with a full spectrum poppy display including a tasteful machine gun nest and a glum skeleton in German army uniform. Nice touch with the trench rats, by the way:

The keen-eyed Giant Poppy Watch found this powerful Christmas/Remembrance mash-up, something we should all consider this year:

And Giant Poppy Watch also unearthed this tasteful commemorative whiskey, described here as having “gentle undertones of smoke”. Mmmm, takes me back to the war in Afghanistan. I’ll be self-medicating with this later:

A good way to #Remembrance those who died fighting against bigotry and hate is by sticking some Poppies™ on your bigoted, hateful sign. pic.twitter.com/OTdK7r2oeE

Joking aside, wear whatever coloured poppy you want this year, and remember loved ones however you want. My personal view is this: the best way to respect the war dead isn’t by projecting poppies onto power stations, painting them onto the road, or waving them angrily at asylum seekers. No, it is try and keep their numbers to a minimum.

Stay safe out there, troops. We’ll leave you with this all-time classic, and a simple question:

WHY ISN’T THIS GIANT HUMAN POPPY WEARING A POPPY?

The most respect that has ever been paid on a football pitch pic.twitter.com/3DVd7wk0Mz

Featured image via pxhere and pxfuel