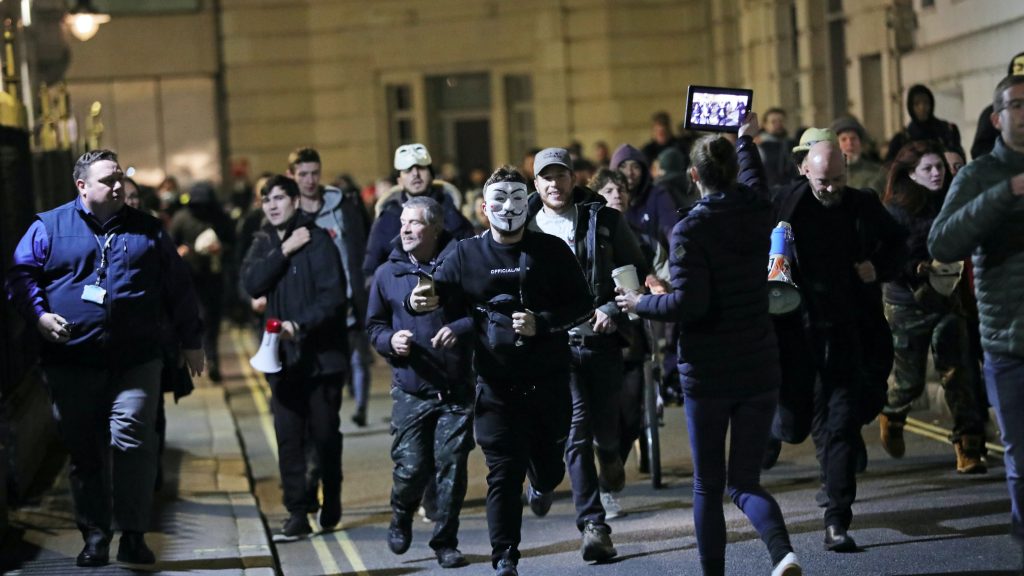 Scotland Yard has apologised after journalists and photographers covering an anti-lockdown protest were told to leave and threatened with arrest.

Journalists at the demo protesting the new national lockdown in England in Trafalgar Square on 5 November were reportedly told by officers they were not seen as essential workers and needed special permission from the Met Police to be present.

The reported incidents took place as police clashed with protesters in the capital on the first day of the month-long second lockdown.

The Society of Editors (SoE) has written to the Home Office and Met Police seeking “urgent clarification” that photographers and journalists will be able to cover protests which take place under the new lockdown measures in England. It said that National Police Chiefs Council guidance stated journalists are covered as key workers and “there is a public interest in keeping the population informed of the developing crisis”.

Ian Murray, executive director of the SoE, said the reports were extremely concerning.

At the very least this is poor communication to frontline officers of the ruling by government that journalists are considered to be essential workers during this crisis.

At worst, this is an alarming disregard of the principles of a free media going about its lawful business.

It is frighteningly Kafkaesque for police to use the excuse that because a protest is considered to be against the law, journalists are also breaking the law by being there to cover what is taking place.

That sort of logic is used by tyrants and totalitarian states the world over to suppress the truth.

In a statement sent to the SoE, and seen by the PA news agency, the Met apologised for “any confusion or difficulties” that were experienced covering the protests. It added:

The MPS absolutely recognises the status of journalists and the public interest in them carrying out their important work. We apologise for any confusion or difficulties that some experienced whilst covering last night’s protests.

These can be challenging events for all concerned; it is not always easy to differentiate journalists from participants since unlawful protests are by their nature often chaotic.

We have issued additional briefings to our officers to enable journalists to carry out their work, at the same time as our officers maintain public safety and enforce the law.

Police have arrested 190 anti-lockdown protesters with one potentially facing a £10,000 fine, which can be given to organisers of large gatherings. The other 189 are being investigated for breaching the new coronavirus (Covid-19) regulations which can be punished with a £200 fixed penalty notice, reduced to £100 if paid within 14 days, which doubles on every offence up to a maximum of £6,400.

In a video from the protest an officer can be seen asking journalists if they are authorised to work at the event and told them they were “part of the protest and there is no protest allowed”.

Video journalist Jason Parkinson, who was captured speaking with officers in the video, told the SoE that he was told to leave the area or face arrest.

As soon as the arrests started myself and a photographer were confronted by the police liaison you saw in the video.

Initially I passed it off as one of those isolated incidents, but soon after I saw another video journalist, Anthony, who was later assaulted, being told the press were not exempt from arrest.

Over the next hour every member of the press I met said they were being threatened with arrest if they did not leave the area.

In addition to the recorded incident I was also told by officers to leave the area or face arrest and told the press must only gather in groups of no more than two, despite us wearing masks and adhering to two metres as closely as possible.

Other photographers reported showing accredited press cards but these were ignored, the SoE said.

Big Brother Watch said this in response to the incident:

The right to protest is the lifeblood of democracy.

Whatever you think of the lockdown measures, there's no doubt that they're a massive interference with our rights & freedoms.

People MUST be able to demonstrate against ANY Government policy they disagree with. 1/2 https://t.co/XJP1WvWRiB