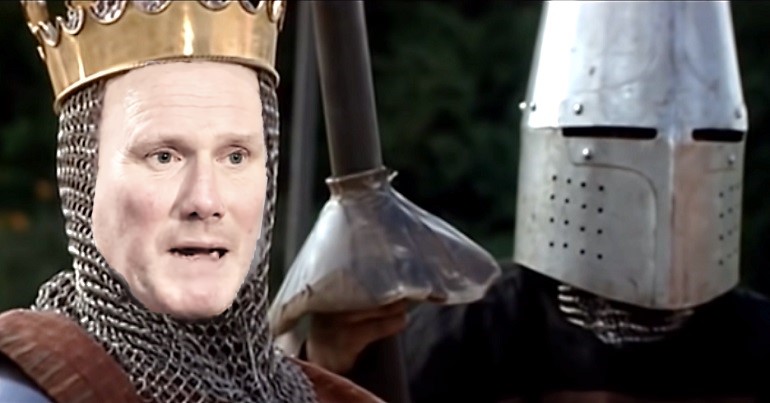 As if the UK didn’t have enough to deal with at the end of 2020, enter Keir Starmer to make matters even worse. Or, if you live in Scotland and/or are a supporter of its independence – the Labour leader just did you a favour.

On Monday 21 December, Starmer gave a speech on Scotland. It was setting out his plans for the future. The BBC reported that this was in advance of the 2021 Holyrood elections. Let’s ignore the fact that the Labour Party’s timing for this was dire; you’d think, given the country is gripped by a “Brexit Island” crisis, someone would have told Starmer to scrap his speech.

But no, his speech went ahead anyway. And it was devoid of any understanding of why 58% of people want to break from the UK.

How many ‘separatists’ does it take to make a Starmer speech?

said the pandemic had put “rocket boosters” under the case for decentralisation of power, saying his party must “grasp the nettle and offer real devolution of power and resources” if it is to have any hope of preserving the future of the union.

He said: “It is Labour’s duty to offer a positive alternative to the Scottish people. To show that you don’t have to choose between a broken status quo and the uncertainty and divisiveness of separatism… “

“Separatism”? No, he really did say that – repeatedly, in fact. In the text of his speech, Starmer said “separation”, “separatist” or “separatism” ten times. The phrase is insulting and condescending for many people – much like Boris Johnson intentionally calling the SNP the Scottish “Nationalist” Party. As The Canary‘s editor-at-large Kerry-Anne Mendoza said:

Starkers called the Scottish independence movement “Scottish separatists” in his speech. Over and over again.
If he thinks this is going to impress anyone but the Smug Centrist crowd, he’s off his rocker.

But it gets worse.

The Broon is back

BBC News noted that the Labour leader would preside over:

the setting up of a UK-wide constitutional commission, advised by former prime minister Gordon Brown, to deliver a “fresh and tangible offer” to the Scottish people.

Yes, ‘Gordon ‘the Vow’ Broon‘ is back. The former PM had a shambolic involvement in the first Scottish Independence Referendum and its aftermath. Yet Starmer thinks people will still listen to what Brown has to say. You couldn’t make this up – because the former PM is, for many people, as detached from a “positive alternative” for Scotland as you can get.

Moreover, the problem with Starmer’s vision is that he doesn’t really have one. Admittedly, there was no detail in his speech. That is presumably to follow. But after a year that’s seen Brexit, economic, and pandemic chaos – the idea that Scotland is “Better Together” when the Tories repeatedly get elected to the Westminster government will ring hollow with many. And Starmer’s plan will do little to change this.

But what his speech also shows is that Labour still has not got its head around the Scottish independence movement.

Westminster politicians can offer Scotland as much devolution as they like. But history and the present day both show that even with some level of devolution, Scotland is still under the English thumb. And recent public votes, be they elections or referendums, have also show that the will of the Scottish people is often irrelevant; the public ending up with the opposite of what they voted for.

Devolution that delivers full Scottish autonomy from Westminster is a circle that cannot be squared. As the SNP’s deputy Westminster leader Kirsten Oswald said:

Even Mel Gibson shows Starmer up

I watched Braveheart for the first time ever on Sunday 20 December. Historically laughable, dubious in its stereotyping with equally bizarre accents to boot, it fails to stand up to scrutiny over why it won so many awards nearly 25 years ago. But for me, it contextualised the current Scottish independence debate quite well. As King Edward Longshanks said in the film:

The trouble with Scotland is that it’s full of Scots.

The same English mindset that was shown in Braveheart still somewhat exists today. That is, many English politicians have an almost inherited, colonial (and in some cases possibly subconscious) mindset that they are born to rule over Scotland and can do as they please. The idea that Scottish people are somehow lesser humans may not be acutely present – but in the darkest depths of the English establishment class’s DNA, it’s there. Many Scottish people feel the English consider them inferior and something that needs controlling and ruling – and pillaging and exploiting, too.

They’d be right. No amount of sugar-coated, polished spin from Starmer about a new and shiny form of devolution will change this. And the sooner Scotland can evacuate itself from Westminster, the better for them.